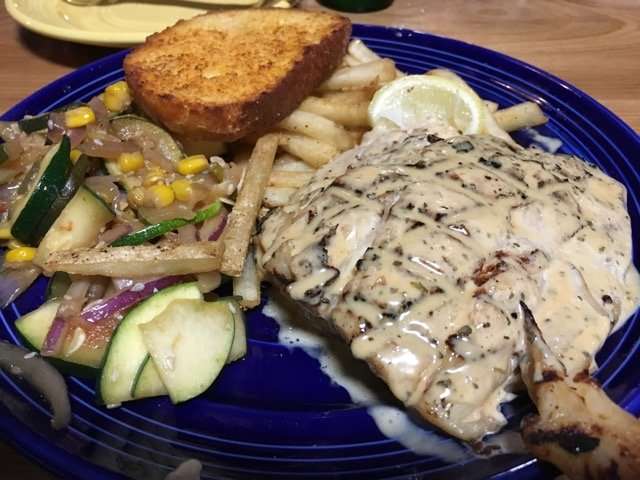 I’ve lost track of all the businesses that have occupied the space at 4315 N. Orange Blossom Trail in Orlando. I’m pretty sure my first encounter with the massive property on the shore of Lake Fairview was with Shooters Waterfront, an Orlando version of the Intracoastal Waterway hot spot from Ft. Lauderdale that opened here in 1990. Didn’t last long.

The new tenant is Grills Lakeside Seafood Deck & Tiki Bar, which is similar to Shooters in that it is an inland location of an open water eatery, namely Port Canaveral.

But Grills differs from the old Shooters in one major aspect: It offers good food to go with the view.

Because of its proximity to water, Grills has always counted seafood as its forte. That continues even without counting on a Lake Fairview catch. I ordered the mahi mahi that was offered as one of the fish of the day. It was nicely grilled and slathered with a buttery sauce. It was served with a rather curious medley of vegetables — zucchini, onions, corn — and some tasty fries.

For those with tastes other than seafood, the Cat 5 Hurricane Cheeseburger is pretty darned good. It’s immense — described cheekily on the menu as a “whale of a burger” — and the one I sampled was grilled to a perfect medium rare. Beside a side of beef, it had melted cheese, chewy rashers of bacon, grilled onions and mushrooms, some lettuce and tomato. Why a burger this good would be served with pedestrian ruffled potato chips instead of fries is beyond me, but there you go.

The dining spaces make good use of the lakefront locale, with large windows for water views if you’re dining inside and plenty of seats if you choose to dine outside. ( Though whoever thought that the long benches at the outdoor bar that require people to mount them like a pommel horse would be fun was wrong about that.)

But once you’re up on the bench, you’ll have a pleasant view. And thanks to Grills’ kitchen crew, you can also have some good food.