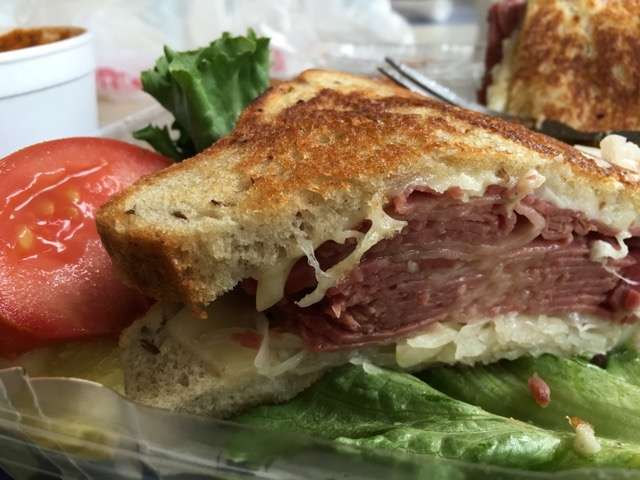 You wouldn’t expect to find savory soups, salads and sandwiches at a place called George’s Gourmet Cookies. Even less expected would be to find those foods not just good, not just something to grab on the go, but excellent. Food that I can only describe as having integrity.

By that I mean that from all tastes and appearances, the food served at this little hole in the wall is not produced via shortcuts, like defrost and heat, or open another can before the lunch rush. It’s produced by people who care about the quality, regardless that it is being served from a counter in a space that does not appear to have a huge kitchen.

Still, I would not be surprised to learn that the corned beef that’s the star ingredient of the sandwich called the Abigail had been corned right there in the back, it tasted so freshly seasoned and was oh so tender. The Abigail, the menu explains, is George’s version of a Rueben, with the expected salted beef brisket, sauerkraut, swiss cheese and 1000 Island Dressing. The menu states that everything was house made except the cheese, which was imported.

A cup of chili that I ordered to accompany the sandwich was no less honest, filled with beefy gravy, lots of ground beef and a heavy dose of chili powder and cumin. Not a chili I would enter in a national contest but a nice bowl to start with.

The sandwich came with a choice of side dishes, and each was worthy of being a separate entree. Especially the potato pancakes, which were big, thick and perfectly fried.

All of it was more than I could, or care to, eat at once, but the flavors were all so wonderful that I had a hard time stopping myself.

While the food here is near perfect, the process of ordering it is flawed. Even with just a few people waiting to place an order, the staff seemed a bit overwhelmed and without a proper procedure. But they were all quite gracious, if a bit harried, and even managed to check on my outside table to see if there was anything else I required.

I’ve known about George’s Gourmet Cookies for some time, and the big disks of cakey confections still bring people here. But have one for dessert after a lunch that you will surely remember. If you still have room for a cookie.