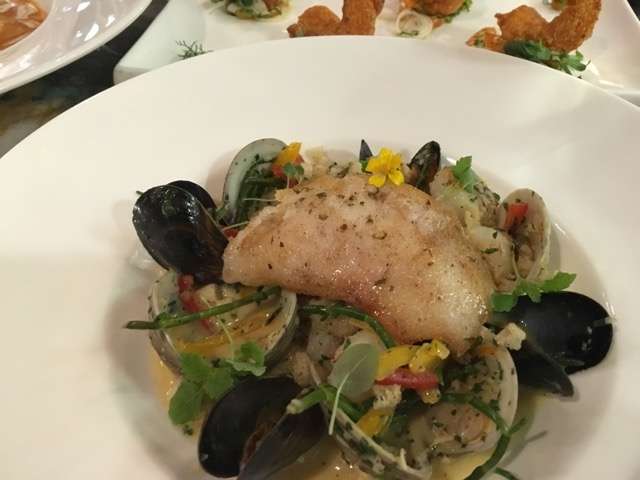 And just like that, Flying Fish, formerly known as Flying Fish Cafe, has become arguably the second most elegant restaurant at Walt Disney World. Only Victoria & Albert’s offers a more upscale decor.

The restaurant, on Disney’s Boardwalk, was closed in February for a complete renovation. And it’s beautiful.

There is still an on-stage kitchen, and instead of the tiled chef’s counter, gathering-height tables may be abutted next to the kitchen counter to affect chef tables of various sizes.

Speaking of the chef, there’s a new one in charge to go with the updated decor. And Tim Majoras figured he might as well go and redesign the menu.

No, the potato-wrapped snapper first introduced by the restaurant’s original chef, John State, and retained by his successors is gone. I don’t think anyone will really miss it.

Seafood, which the restaurant claims to be 100 percent sustainable, is still very much the focus of the menu, although meat items are given careful attention, too.

My hosts and I started with a sampler of appetizers. My favorite was the one called Tour of the Coast that featured locally sourced middle neck clams and Icy Blue Mussels from Cape Cod, firm nubbins of rock shrimp and tender grouper cheek from Florida, in a bit of celeriac purée.

My favorite entree was the Chilean Sea Bass with Spanish Octopus served on bomba arroz, a short-grain Spanish rice. The fish was beautifully seared and had wonderfully moist flesh. The octopus tentacle, coyly coiled around the fillet, had a delicious smoky note. Some tender-firm shrimp rounded out the dish.

Bison Strip Loin was our meat choice. It was prepared to the requested rare and served as coins on the plate on platforms of ancient grains and salsify with cipollini onions and green beans.

It was a good demonstration that the kitchen is just as adept with meat as it is with seafood, but for me, it’s still the fish that flies highest here.