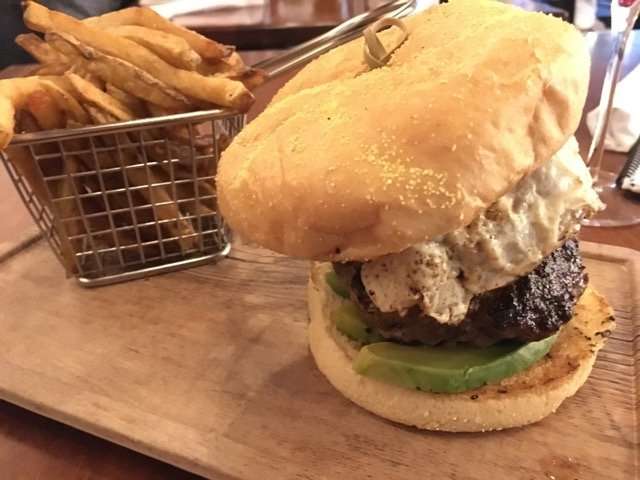 When my order of Chicken & Dumplings eventually arrived, I immediately noticed something was missing. I mean other than a spoon to eat it with. It seemed to be devoid of dumplings. So not chicken & dumplings. Chicken &.

This was at Firefly Kitchen and Bar, the business that has taken over the former Taps space in Winter Park Village.

I confirmed the dumpling deficit after I was given a spoon — a teaspoon instead of soup spoon — and fished through the thick and tepid broth. Although ordered as a first course, the soup was served simultaneously with the burger that I had ordered as an entree. So I pushed the bowl aside and concentrated on the burger.

I had already cut into it and tasted it when someone came by the table. It wasn’t the young woman who was my server but rather a man I assumed was either the manager or an owner. He asked, “How’s the burger?”

Rather than answer that question — dry, overcooked, ridiculous — I asked one of my own: Where were the dumplings in the chicken &?

And instead of immediately offering an apology, he offered a defense: “I didn’t serve this.”

A replacement was offered but I said I didn’t want it. I might have if the dish been served as a starter instead of side dish with the burger. (And how much nicer it would have been to have a first course earlier, rather than waiting nearly a half hour for it all.)

Oh, that burger. I should elaborate. You’ll understand the dryness and the overcookedness, but the ridiculousness needs further explanation.

I chose the Fried Green Tomato version, which indeed had said topping, thick and hard as it was. It also had slices of fresh avocado, cheddar cheese and a fried egg all nestled above and below a thick patty in a kaiser-like roll.

But it was absurdly tall and unwieldy, impossible to pick up and eat. And when I cut into it with a knife, the yolk from the egg squirted onto the table.

Look, I’m all for creativity, though I don’t quite get the rationale of these particular ingredients together any more so than the peanut butter on the burger called the Piggly Wiggly. And I understand and appreciate the role of a restaurant to delight and impress.

But there’s a point where something like these burgers stops being fun and just becomes an annoying mess.