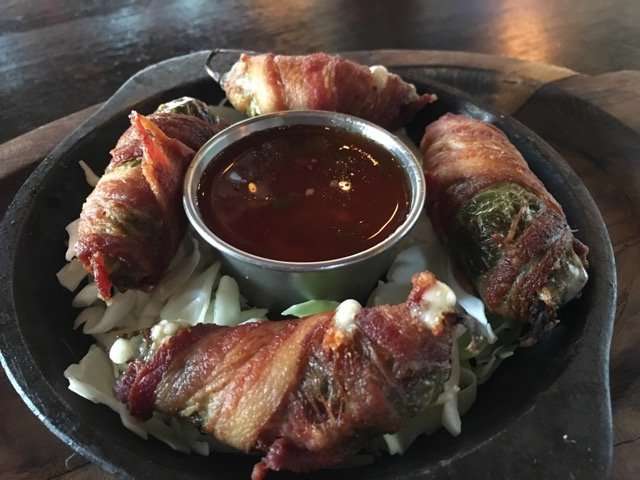 To understate it just a bit, I wasn’t all that impressed with F&D Cantina when it opened in mid 2016 in Waterford Lakes. Besides being served food that was at a temperature lower than what could legally be considered warm, the service was lacking and the surroundings offered nothing to enhance the experience.

That location has closed.

But another F&D Cantina has popped up in Lake Mary, and I’m pleased to say that the F&D Cantina in Lake Mary is good enough to make the Waterford Lakes location a distant memory.

Let’s start with the restaurant itself. The interior design makes good use of the storefront space, with a dominant bar with a high backbar that rises to a mezzanine dining area. Mexicobilia gewgaws are placed here and there.

The food was served hot, I’m happy to report, both in temperature and in seasoning, where appropriate.

A bit of heat was apropos for the Bacon Wrapped Jalapeños, four peppers packed with chihuahua cheese and thick rasher tightly wound around. They were served with a jalapeño jelly for dipping but were just fine without it.

For my main I chose the Chicken Enchilada, with plenty of meat inside the wrapper and a light cream sauce on top. It was accompanied by black beans and Spanish rice and all were fine.

My lunch guest had the Puffy Tacos with stewed chicken and cheese inside flour tortillas that had been puffed up from deep frying. More than just whimsical, the tacos were stuffed to cornucopia-like capacity.

Our server had a very nice balance of efficiency and low-key attentiveness. She read our table well, allowing us the space to conduct a businesslike conversation.

Perhaps the Waterford Lakes F&DC was too far away for sufficient oversight of the operation. Proximity to the other F&D, confusing as it can be, may be the key to the success. Whatever the cause, I’m pleased with the outcome.