Spotlight: Every day is Halloween at AEO Studios Creature Workshop 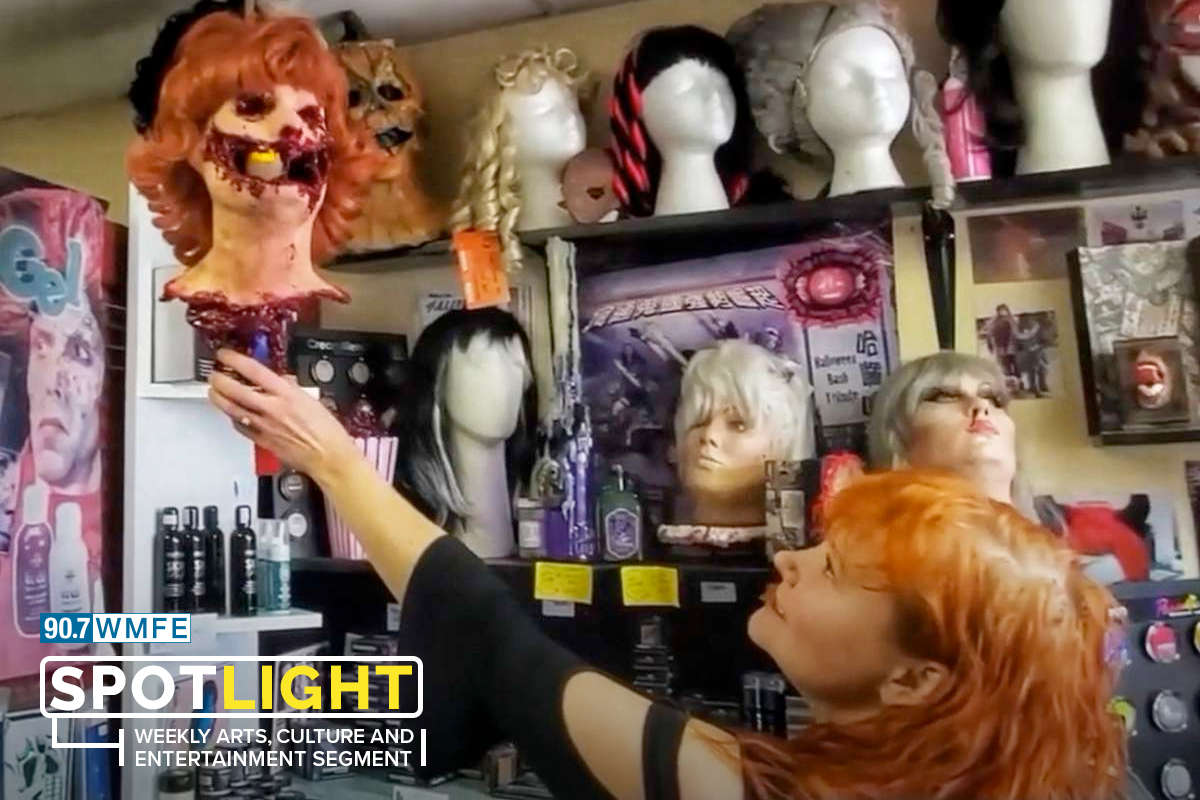 It’s Halloween season, and like Sleepy Hollow, Orlando has its own scary legend…

Well, okay, Alan Ostrander of AEO Studios is not scary himself, but his creations are.

He’s an expert in special effects makeup, prosthetics, and props – creepy ones. In his workshop behind his retail store, “spare parts” takes on a whole new meaning!

What looks like a severed head has a fake candle inside – a “head lamp,” he calls it. There are broken legs he’s making for an upcoming production of Misery. You know…the hobbling scene? Yeah, that.

Life-size aliens and other monsters lurk in corners…next to harmless-looking art supplies, like buckets of sculpting latex, plaster casts, and paints.

Alan Ostrander:
We are the oldest theatrical makeup, retail shop and production center in Orlando. We’ve had this company for 26 years, we have a retail store as distributors for all the theatrical makeup companies, and also our production studio, where we fabricate all types of custom props, makeups, prosthetics. Nothing is too strange or out there for us. (laughter) Myself, I’m not really into horror and scary that much. But that’s the majority of our business.

Nicole Darden Creston:
It seems surprising that you’re not into horror and scary that much (laughter). Do you have, in all of that time, a favorite project that you have ever worked on? Or maybe a couple? I imagine choosing one would be hard.

Alan Ostrander:
Probably the biggest thing would be the years that I spent in Hong Kong. In 2001, I was invited over to basically bring Halloween to Hong Kong, working with a theme park there [Ocean Park, Hong Kong’s second-largest theme park after Hong Kong Disneyland]. And I thought it would be a great job for a couple of weeks. It turned into 13 years, where I was there six months out of the year and actually garnered the moniker of Hong Kong’s “father of Halloween.” It was an incredible experience watching the growth of this holiday. It had not been celebrated there before. They did not know what the Western holiday of Halloween was. And when I left in 2013 I was directing 520 actors a night, 13 stage shows, eight full haunted houses…all in Cantonese, which I don’t speak. So that was a challenge. Well, luckily, everyone speaks English for the most part. It was a great experience. I had incredible artists on our team. Yeah, it was definitely a challenge melding the Eastern and Western and finding out what scares people in different places.

Nicole Darden Creston:
So scaring people is different. The “jumpscare” isn’t necessarily the universal language, is that what I’m getting here?

Alan Ostrander:
Well, the jumpscare is. That’s universal – getting quick, scary impacts. But the theming can be very different. We found out very early on over in Hong Kong. If we see Freddy [Krueger] with claws in a sweater, we immediately know who it is and we get scared. They look at him and just see some ugly guy with nails and bad clothes.

Nicole Darden Creston:
So no frame of reference for the “Nightmare on Elm Street” movies.

An assortment of nightmares populate Alan Ostrander’s unique “inbox” – a basket on the workshop wall marked “Ready to be painted.” Photo: Julian Bond

Alan Ostrander:
Exactly. It’s all context. As I started transitioning from doing the makeup to directing the entire event, I had to do a lot of research into the superstitions, the mythologies in East Asia. And we would play on those. One of our attractions that was the scariest ever for the local residents was a paper-doll house, which to us Westerners, there was nothing scary looking at this at all. But just the significance of what it represented in the afterlife…we had guests that would not even go into the attraction, it was that scary. So it was very educational, wonderful experience.

Nicole Darden Creston:
I think this might be two questions, but I’ll make it a part A and part B. What inspired you to get started and what inspires you to continue?

Alan Ostrander:
I would say what got me started was just a love of the theatrical environment. I’ve been a theater brat my whole life. I love performing and just affecting people, whether it’s making them scream, laugh, cry, or think. I fell in love with Halloween because it’s wonderful escapism. And that was one of the biggest reasons for success in Hong Kong, was it was a way for them to be someone else for a few days and not themselves. I think that was one of the reasons that it took off so much. But I just love the theatrical world and all its craziness. (laughter)

Surprise! This is not only a sample of Alan Ostrander’s work – this is, in fact, Nicole Darden Creston playing her character Trixie the undead usherette at the now-closed haunted attraction Terror On Church Street, where Alan Ostrander began his special effects makeup career. Photo: Alan Ostrander

Nicole Darden Creston:
Would you be giving me spoilers if I asked you to tell me a couple of things that you’re working on right now?

Alan Ostrander:
Not at all. We have all kinds of things going. Besides Halloween. We work with a lot of different theater groups. We are actually the largest fabricator of ogre parts for “Shrek the Musical.” We’ve been making those for about 10 years. And right now we have bloody broken legs for a production of “Misery” being made. We just did three productions of “Young Frankenstein” in the last few weeks and we made the headdresses for those. We have rotting corpses out on the table that will be part of a medieval torture exhibit at a local Renaissance Festival. So it’s something different every day.

Nicole Darden Creston:
You say “we.” Can you tell me who else you work with?

Alan Ostrander:
My business manager and office manager partner here is also my husband and partner Drew Dalire. We also have several interns. We teach workshops almost every weekend. And I’m very big about paying it forward and keeping the craft alive. So we tend to ‘adopt’ our students, and we help them get started in the craft if they want to. And from there, we’re able to keep a network of about 20 artists, so when we do get the larger jobs, the larger film shoots, we can pull from that group. Our company slogan is “creating everything from demons to divas.” And that is what we do. The next big step that we’re looking at getting into is more medical applications of special effects, working with silicone prostheses, and seeing if that’s another way that we’d be able to help people look better and feel better about themselves. I never know what’s coming in the door tomorrow, and that’s part of the excitement and what keeps us going in this.