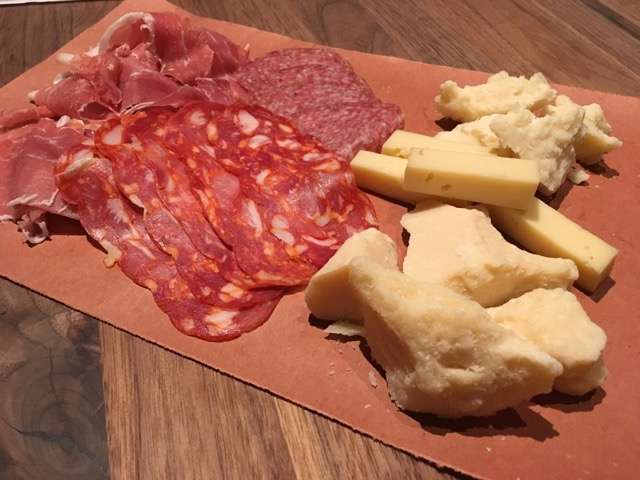 In terms of splashiness and go-for-the-awe design and decor, Enzo’s Hideaway, from Patina Restaurant Group, offers much less than its sister restaurants at Disney Springs. Morimoto Asia has an opulent two-story dining room with elegant chandeliers; The Edison resides in what was supposed to have been an abandoned power producing facility, and Maria & Enzo’s has the dramatic effect of a grand old airline terminal with large windows overlooking the lagoon.

Enzo’s Hideaway has no windows and no double-height ceilings. It’s dark and slightly dank and several of the walls are covered in graffiti. I enjoyed myself here more than at the others.

Which is not to say that I don’t like the other restaurants; I do. But I think the absence of splash and distractions allows one to focus more on the food here. And the food here is really quite good.

Try the Polpettine, or classic meatballs, for instance (that’s an order). Big, dense, moist and meaty, served in a puddle of polenta with a small moat of red sauce around.

Suppli alla Romana featured globes of rice with a crisped and golden crust. Inside, bits of prosciutto were nestled in the moist arborio.

Because I was dining with a celebrity (can’t tell you who), the chef Theo Schoenegger stopped by to say hello and to drop off a platter of charcuterie that would have been feast enough.

Zuppa de Verdure e Fagioli was the only thing I had here that failed to thrill. It certainly looked encouraging, with various styles of pasta and plump cannellini beans in a tomato tinged broth. But the flavors were flat, nothing that a couple of shakes of salt or a dash of olive oil couldn’t fix.

Nothing needed to be changed with my entree of Chicken Milano, it was perfect. It featured an airline breast, pounded and breaded and sauteed until it was the color of the Lombardy sun. A stack of fresh arugula, lightly dressed, slabs of parmesan and multi colored tomatoes held it down.

My companion’s “Classic Lasagna” was done more in the Roman style, the pasta layers looser, the ragu meatier, and with a béchamel to lighten it a bit. I truly can’t decide which of the two entrees I like more.

For dessert, the house sent over a trio of sorbets, including orange, lemon and strawberry, airy, light and refreshing.

And Tiramisu, not airy, not light, but a wonderful indulgence.

The overall feel of the space is that of a basement or hidden den. I didn’t research the Disney Springs-required backstory but I imagine it has something to do with Enzo wanting to create a space where he could get away from his wife, Maria, when she started harping about their seaplane business drying up (so to speak).

Some people will be attracted to Enzo’s Hideaway specifically because it’s enclosed and hidden and away from the onslaught of sensory overload. A quiet place. With seriously good food.