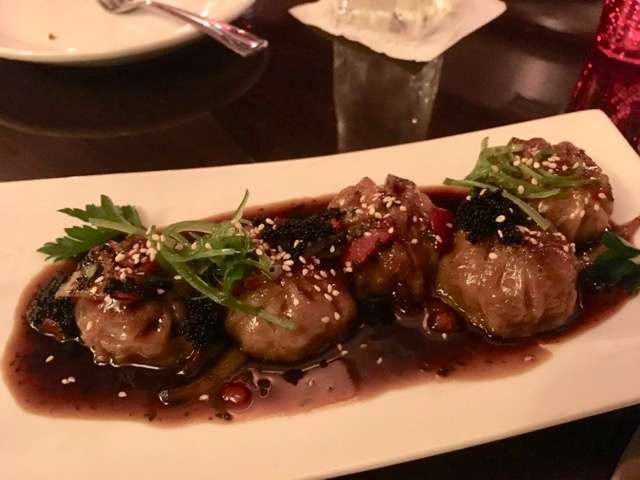 The word fusion is one of the most misused terms in culinarydom. More often than not, a restaurant will tout itself as a fusion restaurant when in fact all it does is offer two or more cuisines on the same menu.

But fusion occurs when two or more items come together to form something different, something unique.

So you might have Chimichanga Eggrolls or Peking Duck Nachos. Or Congri Fried Rice. It’s inventive, and even better, most of it works.

On my first visit to El Buda, which occupies the hidden restaurant space in the back of Church Street Station, my guest and I were treated to Herame Con Coco, a cool crudo presentation of the white-fleshed fluke that Treviño also featured at his former restaurant in Puerto Rico called Budatai.

I also sampled the Pork and Sweet Plantain Dumplings, little purses sitting in soy, sprinkled with sesame seeds and decorated with seaweed as well as fish roe. Very nice.

Those Peking Duck Nachos featured shredded meat in the middle of wonton chips arrayed like a sunflower. The duck was good, but wontons just can’t compare to tortilla chips.

On a lunch visit, I had the Chicken Banh Mi with Mole Dipping Sauce, a nice blend of a banh mi’s classic pickle flavors and the earthiness of the dark mole. It would have been a winner with a better chicken cutlet that the hard breaded one I was served.

The space is problematic. It is neither attractive nor comfortable.

Servers have to do a lot of explaining because the menu has virtually no descriptions of the dishes. That takes a lot of time.

But most of the issues I have are mere niggles. It’s time for this venue, which is behind Hamburger Mary’s and Pepe’s Cantina, to start attracting its own diners. El Buda just might be the right concept.