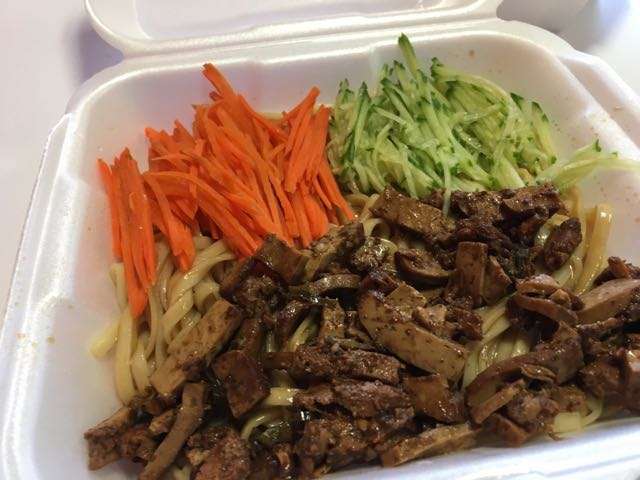 What makes it more interesting is that along with the aisles and shelves of specialty foods and dry goods that you won’t find in your basic Publix, a corner of the store is dedicated to a small cafe with an exclusively vegetarian menu. In fact, a note at the top of the menu board next to the kitchen reads, “Everything is vegetarian. Deal with it.”

There isn’t a whole lot to deal with. The menu is succinct and the food is good.

Despite the vegetarian note, some ingredients are referred to by their meatarian names, such as ham and beef. It was “ham” in the Special Bun appetizer, two steamed bao buns with chunks of tofu that look nothing like ham but have nice chewiness and good seasonings. The menu mentioned a “hint of jalapeño,” but it was more like innuendo.

The same nonham ham was part of my Cold Noodles entree, which also had sticks of carrots and cucumber. The young man who was working the kitchen (and taking the orders and serving the food) asked me if I wanted it to eat in (there are a few tables for doing so) or if I wanted the food to go. He was slightly flummoxed when I told him both. (I like to have some of the food at the restaurant and take the rest home for later.)

We agreed that the food would be delivered in a takeout box instead of on a plate. And he said that he preferred to have this particular dish in a takeout box anyway because one can simply shake the box to mix all the ingredients together. (With the lid closed, of course.)

I could have shaken the box more vigorously, but I liked all the cool textures and flavors.

Like the market, the menu is not very big. But it offers nice options for vegetarian fare for Eastsiders. The rest of you can just deal with it.