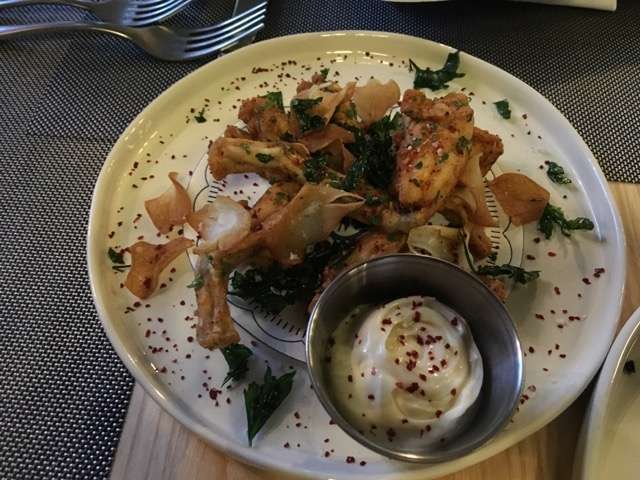 DoveCote, a brasserie, has opened in the Bank of America building in downtown Orlando, and it’s a welcome addition.

One of the most impressive things about the new restaurant is the space itself. It has undergone a transformation that is, well, transformative.

The bar has been expanded, and the kitchen is now open and visible. I can’t say that I’m a huge fan of all of the design choices, though I love that someone was daring enough to make them — not sure what the white steel girders are doing there, other than to bring down the feel of the voluminous ceiling and to allow a perch for a fake bird. Dovecote is a French word for a pigeon sanctuary, so I guess we should be grateful that chicken wire wasn’t employed in the decor.

And before you ask, no, squab is not on the menu.

Frog legs are, however, and they’re quite good. I’d be prepared to call them the best in the area if I knew of anyone else who was offering them.

Chicken Leg Confit was another winning appetizer. True, confit is a process usually applied to the legs of ducks, but Chef Clay Miller’s rendition gives this dish a distinct countrified flair.

I liked the Croque Monsieur — I don’t think the French take the classic sandwich as serious as DoveCote does. It was thick and meaty and covered with a perfectly executed mornay.

An entree of Butter Roasted Chicken was a winner, but what part of “butter roasted” would indicate otherwise?

There are a few niggles — the menu is rife with misspellings and the staff hasn’t been given proper pronunciations. But ultimately, DoveCote is on the right track.