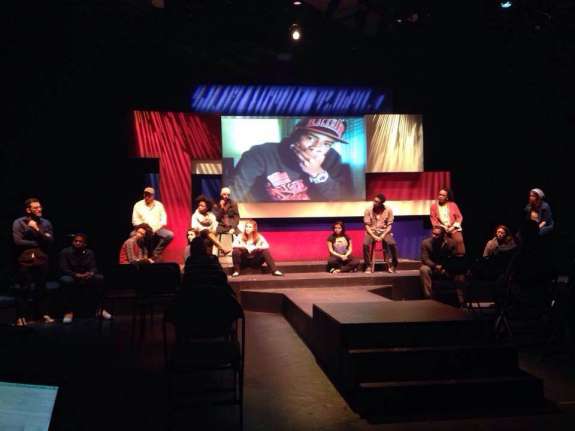 A scene from "Division - The Trayvon/Jordan Project." Photo: Kara Thiebauth

The play is called “Division – the Trayvon/Jordan Project.” It’s part of a year-long collaboration among several theater groups who are examining from an artistic perspective the fatal shootings of Trayvon Martin in Sanford and Jordan Davis in Jacksonville.

The show is a limited engagement. The last performance is Monday, February 16th…the date Jordan Davis would have turned 20.

As part of Wednesday’s opening night performance of “Division,” the words of Florida’s “Stand Your Ground” self-defense statute thundered through the theater as the show’s ensemble of actors joined in reciting it, one by one. The play’s diverse cast of student and professional performers sometimes portray individual characters, and other times they function as a kind of Greek chorus. The play is a docudrama, so reality and fiction seamlessly intertwine.

But there’s more reality than fiction here, according to “Division” writer/director and Valencia Theater Program Chair John DiDonna. He says he wasn’t aiming to create a story…not when so many people had real thoughts and experiences to contribute.

“We wanted to give everybody a voice,” DiDonna says. “So, in the fall of last year, a group of students and myself started conducting interviews with people. Some people who were close to the cases and the events, both Trayvon Martin and Jordan Davis, and with some people it was just opinion-based. People here in Central Florida, as well as people in California, in Atlanta, et cetera.”

If you followed these events on social media as they unfolded, you found a wealth of opinions from a vast array of perspectives. DiDonna and his students spoke with attorneys, activists, observers, reporters, gun safety experts, and a whole host of others. That made for more than 140 hours’ worth of interviews.

“And we wove those together into the piece you’re going to see,” DiDonna says.

“Wove” sometimes quite literally. At times, two stories are being told at once from differing perspectives, separate but knitted together into a cohesive narrative. Other times, the voices of the ensemble zigzag through a topic from both sides of the stage and even from behind the audience. So don’t expect any attempts at linear or literal re-enactments.

“‘Division’ is not about the events of that night, although we refer to them and talk about them, of course, both the events that happened to Trayvon and to Jordan,” explains DiDonna. “It’s about the impact that those events have had, the pebbles that fell into the water and all the ripples that we’re still feeling across the country.”

Perhaps a ripple is a good analogy for how “Division” unfolds. It begins with a focal point and spirals outward, and although the ripples overlap at times, it’s still easy to follow.

However, projects like this can be tough for Jordan Davis’s father Ron, who attended the opening night performance. “It’s a little difficult,” he says candidly. “But I think that each time you see someone inspired by Jordan’s story, or by Trayvon’s story, it heals your heart. It helps heal you. It’s hard, but it heals.”

Davis says he’s supported the play since DiDonna first contacted him with the idea. “I told him that it was a wonderful thing that the college kids are doing, and that they would bring to life Trayvon and Jordan, together.”

“Division” isn’t a play that offers answers, but it does extend an invitation to examine more deeply the questions surrounding the deaths of Trayvon Martin and Jordan Davis, and the broader issues they brought to light. And it’s that light – and the opportunity for change it brings – that sustains Ron Davis.