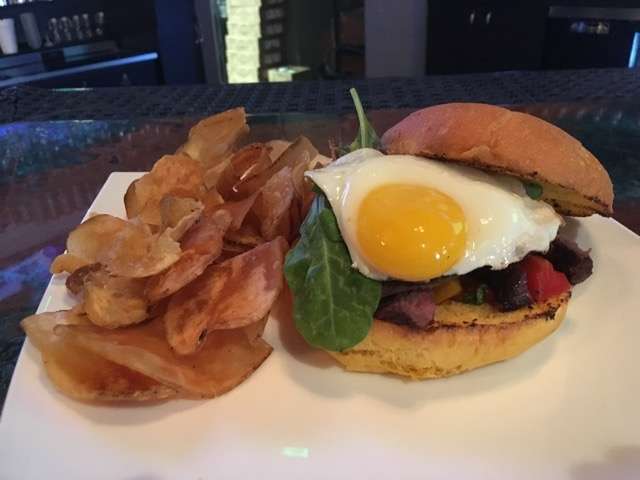 There are a lot of bars in downtown Orlando.

I wish there were more independently owned restaurants than bars — and someday there may be — but in the meantime, the best we can hope for is that some of these bars take it upon themselves to also serve decent food.

Dapper Duck is one of those striving to do just that.

At first glance, the menu doesn’t look very promising. You’ve got your usual bar-food regulars like chicken fingers, jalapeno poppers, and blooming onion (spelled with the g on the end, apparently to avoid a lawsuit from the Outback folks).

But then there are Pork Belly Tacos, Poutine with Hand-cut Fries, and House Pastrami Reuben.

On a quick stop-in for lunch recently, I had the soup of the day, an asparagus and potato with house-made croutons. Mildly flavored with balanced seasonings.

I chose the Steak Sandwich, which featured skirt steak and caramelized onions and roasted red peppers with a bit of tangy chimichurri sauce. A sunny-side up egg brightened it a bit. The steak was cooked to the requested medium rare, but it was also served sliced on top of the bun, which makes it difficult to take bites from. But then, with an oozing egg on top you’re better off just eating it with a knife and fork, so just forget I mentioned it. The house-made potato chips were a nice touch.

It isn’t a big place, and the decor leaves no doubt that this is very much a bar. But it’s a bar that’s doing better food than most of the others downtown.