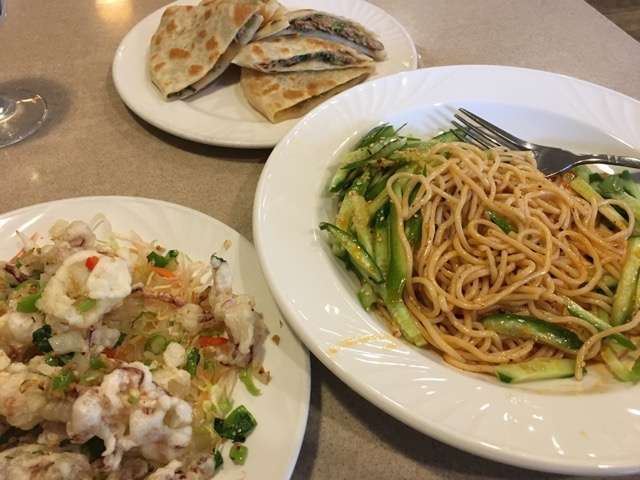 The young man who was waiting to take my order at Chef Wang’s Kitchen pointed helpfully (if not a little impatiently) at one of the pictured menu items. “Foreigners seem to like that one,” he offered.

To understand the level of authenticity, or at least a level that rises above many westernized Chinese restaurants here is Central Florida, you need to know that when he said foreigners he was referring to Americans.

Chef Wang’s Kitchen is located in the repurposed yet still worn looking shopping mall now known as Chinatown on West Colonial Drive. The restaurant occupies a modest storefront tastefully appointed with stone-look tables and substantial dark wood chairs (sturdy enough for any foreigners who come in).

The item pointed out by the young man, who seemed as though he was just trying to help out the other server, was a Pan-fried Beef Knish. Seemed an odd selection for a Far East restaurant. Middle Eastern, yes.

Instead, I chose the Beijing Pork Pancake as one of my starters, and it turned out to resemble a quesadilla. That’s what it looked like, but the taste was identical to flattened potstickers, with the unmistakeable flavors of ginger and sesame oil. I found it odd at first, but once I realized they were made with wonton wrappers instead of tortillas, I liked them.

The Salt & Pepper Calamari was a winner from the beginning. The squid was tender and sported delicate jackets woven out of tempura batter, flash fried and sprinkled with the namesake spices, served on a stack of shredded vegetables. Delicious.

I considered several of the items listed as Specials on the menu, including Spicy Intestine, Chili-pepper Intestine and Garlic Intestine with Leek (but who wants a leeky intestine?). I chose the Szechwan Style Cold Noodle. I usually eat my Chinese leftovers cold anyway so I figured I’d cut out the heating process altogether. The dish is quite simple yet has wonderful depth of flavor. The long noodles were cooked al dente, or whatever the Chinese phrase for that would be, and tossed in chili pepper oil, topped with a stack of julienned cucumbers. I enjoyed half of it at the restaurant and the rest at home — no reheating necessary.

Portions were ample and prices were fair, though not the least expensive Chinese food you’ll find. But it’s worth the price — and they except foreign currency.