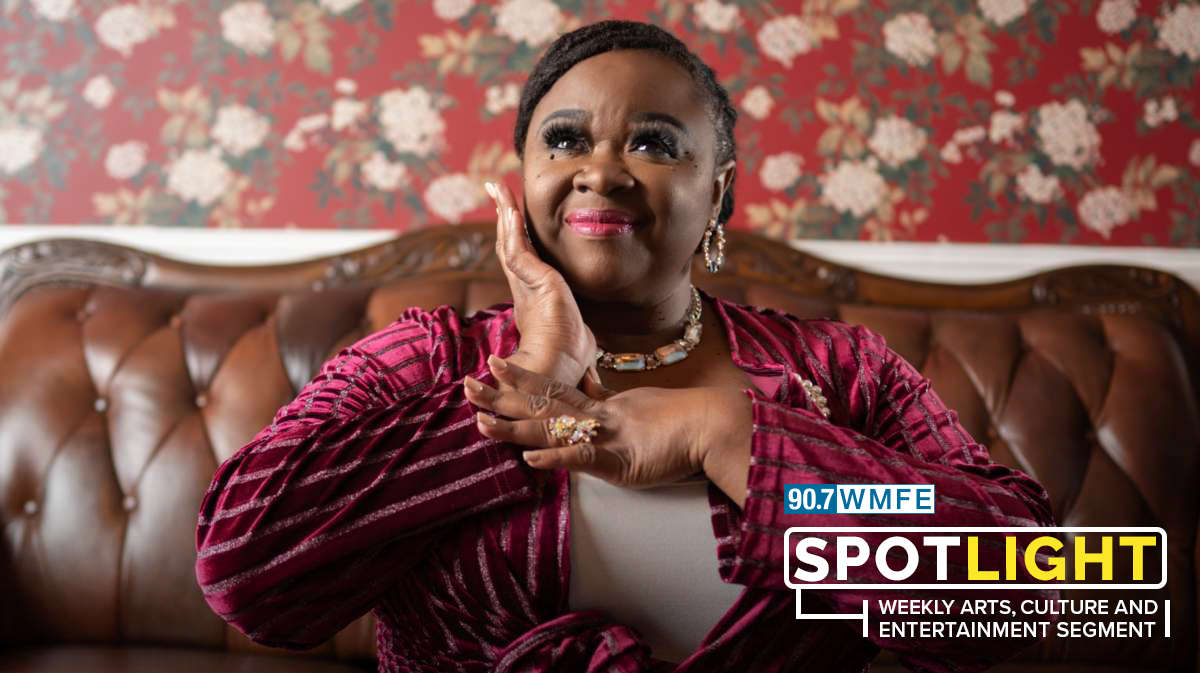 Singer CeCe Teneal is celebrating her 20th anniversary as a soul and blues performer. As part of that celebration, she’s spotlighting other Central Floridians who support the performing arts.

Her September 17th show at the Doctor Phillips Center for the Performing Arts’ Steinmetz Hall is called ICONS. And while she’ll be performing the music of icons – with the backing of the Central Florida Community Arts Orchestra and Choir – the name is not what you think. In this case, ICONS stands for Inspiring and Celebrating Orlando’s Notable Servants of the arts community. Teneal will honor ten of those notable servants between songs.

CeCe Teneal tours internationally with her band Soul Kamotion. She just wrapped up a summer swing through the UK and Spain with her Aretha Franklin tribute show.

She joined WMFE’s Nicole Darden Creston from a cruise ship off Quebec to explain the idea behind ICONS.

Nicole Darden Creston: Why did you decide to celebrate by highlighting others in the Central Florida community?

CeCe Teneal: I feel like a lot of focus is placed on the arts. But there’s so many people that are behind the scenes that make the arts come to life that are not necessarily performers and entertainers. Creatives, philanthropists, programmers. And I wanted to call some names to highlight people that had not only made my career easier, and called my name and rooms that I was not in, but also people that had just been transformational. That’s the word I want to use. In diversity, inclusion, and just really putting that at the forefront of the arts, if that makes sense. So, you know, people like Miss Angelica Sanchez, who is a Pulse (2016 nightclub shooting) survivor, but also has made a safe space for the LGBTQIA+ community to have a live music space, to have a space where they perform. And people like Mr. Grant Preisser with Opera Orlando, who wanted to highlight how Black and brown people are treated in the opera world – their experiences, both on and off the stage. So I wanted to highlight people that noticed that there was a deficiency and wanted to push the envelope on making those things right while also highlighting the arts at the same time.

Nicole Darden Creston: You mentioned the woman who is the Pulse survivor who has the safe space for music. Can you tell me a little bit about that?

CeCe Teneal: Yeah, so Angelica is a transgendered woman. She has been performing in Orlando for a number of years. And Pulse was actually her home base. She was there performing on the night that the terrible incident happened. She was in the bathroom (during the hourslong standoff, along with the shooter). And she really, you know, just kind of was motivating people. And that’s who she is. She’s the person that brings people together. Once she, you know, had gotten comfortable in nightclubs again, she started this music thing, because she can sing. She’s a singer. She’s an entertainer. And she started this safe space for all people to come perform with a live band. And she deserves to be highlighted for the things that she has accomplished and the things that she will accomplish, because this is just the beginning.

Nicole Darden Creston: When people come to see your show, what are they going to see?

CeCe Teneal: I’m asking everybody to dress formal, because we don’t get enough opportunities to have on our gowns, and, you know, get our hair done and get our makeup done (laughter). We don’t get a lot of opportunity to do that. And then as far as the stage, you’re going to see a powerhouse vocalist, there’s going to be a 45-piece orchestra, a 40-piece choir, a five-piece band, and you’re going to see music, hear music, that will make you feel good. The show is hosted by former Miss America, Erica Dunlap. And it’s going to be a star studded event with talent on the stage. We have everything from Tina Turner all the way to Prince on the setlist.

CeCe Teneal: Yes! (laughter) But that’s expected, right? When you say CeCe Teneal, you expect me to do Aretha because that’s what I do. So I will have a little Aretha. But I also wanted to show my heart to the city. So, some songs are very meaningful. It shows direct appreciation to the people of Orlando who always supported me and made me feel like I was “their” celebrity.

Nicole Darden Creston: What do you want people to take away with them from the performance?

CeCe Teneal: I want people to take away… So I don’t want to get too deep, but I feel like after everything that we’ve gone through in the last few years, with the pandemic, with social and racial injustice, I really want people to leave this show with peace, love, joy and hope. And I hope that we have selected songs that are going to make people feel like that. The audience is going to be diverse. The audience is going to be filled with love. And so I want people to leave with love. Music is the universal language. It is the one thing that if you play in the key of C in Brazil, it’s still the key of C in, you know, London, and I want people to understand and take away that with love of music. We can unify and spread love, and if we would just do that, and use music to do that, the world would be a better place.

Check out some highlights below from CeCe Teneal and Soul Kamotion’s 2020 performance at Dr. Phillips Center for the Performing Arts. Her ICONS show will also feature the Central Florida Community Arts Orchestra and Choir.