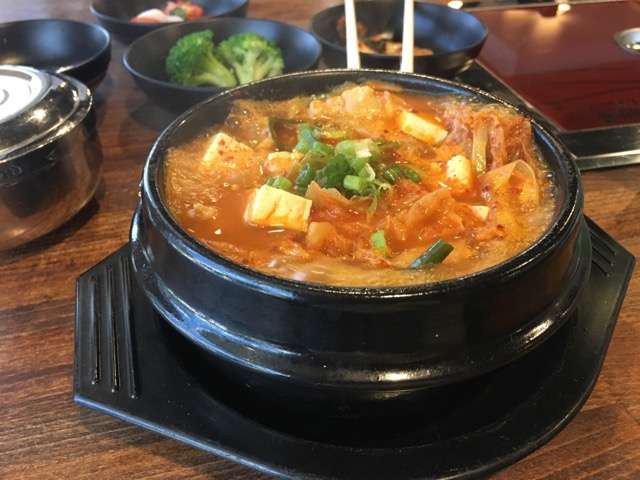 I’m not really big on places where the customers are expected to cook their own meals. I call that home. When I go out to eat, I want someone else to do the cooking.

I’m apparently in the minority. At least I was the first time I visited Bulgogi House, a Korean restaurant on West Colonial Drive between downtown and College Park. Each table has a grill set into it, and most of the tables were occupied with people happily turning over meats and vegetables as they sizzled in front of them. My friend and I looked at each other and thought, Nah, not tonight. (We went elsewhere and had a wonderful prime rib dinner, all of it prepared in the kitchen; didn’t even have to do dishes.)

I returned to Bulgogi House at lunch time when most of the grills are left cold and more of the guests order off the menu.

I chose the Kimchi Jjigae, a traditional Korean stew with the iconic fermented cabbage as a main ingredient and flavor. The young woman who took my order warned me that it was hot. She meant spicy, and I said that was fine.

She might also have meant it was bubbling hot. The bowl that she placed in front of me looked like some of the footage on CNN of the lava flows in Hawaii.

It would be a while before I could taste the soup, so I nibbled on the side dishes that accompanied the entree. These were a little odd, different from the sides served at other Korean restaurants. I don’t think I’ve ever been served a macaroni salad in a Korean restaurant (and as I was eating it it occurred to me that it was the first time I had eaten macaroni with chopsticks.)

There was a tomato salad and a bowl of crunchy broccoli florets drizzled with sesame oil. And, of course, kimchi.

Rice was also served, presented in a silver bowl with a lid to keep it hot.

Hot rice was not needed as the jjigae could be used to heat it up.

The stew is usually made with a fatty pork, and Bulgogi’s had plenty of meat, pork jowl, probably, with chewy bits of fat and a bit of gristle, too. Cubes of tofu were included in the broth, which looked like a type of tomato soup, but the color comes from the juice of the kimchi and its red pepper seasoning. The jjigae was spicy but not volcanic, the seasonings were balanced and proper.

My server was attentive, keeping my water glass filled and checking to make sure I didn’t find the stew too hot. We did not discuss the macaroni.

The surroundings are not the most attractive. This structure, which has been the brief home of a number of other concepts, most recently Taco Twist, always seems worn.

Those of you who do want to cook your own food may choose from the all-you-can-eat menu, but be warned (and yellow alert signs placed next to each table will remind you) that you’ll be charged extra if you don’t eat all you order. And you may not take it with you.

If you don’t like the rules you can cook at home.