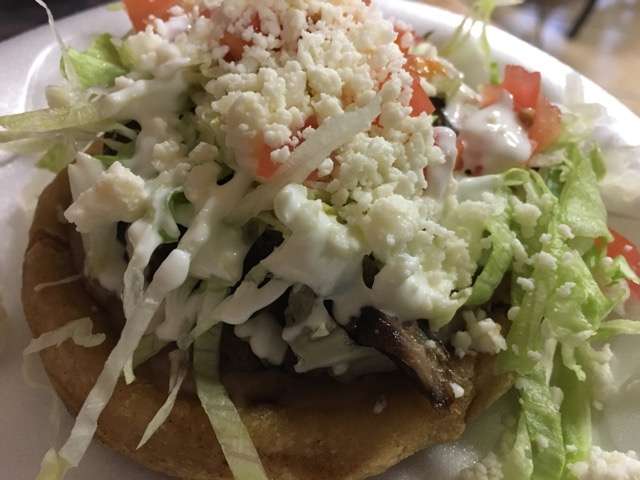 Bugambilias isn’t the sort of place you’d just wander into, not unless you live in the vicinity of Lancaster Road between Orange Avenue and South Orange Blossom Trail. If you do, you know there are myriad Mexican restaurants, many as authentic as you’re likely to find in the area, to choose from. Bugambilas would be a good choice.

Though it isn’t a guarantee of authenticity, it’s a pretty good indication when one has to ask if a menu is available in English. (One was.)

While I was still trying to navigate through the Spanish version, I was drawn to the Pozole, a favorite of mine. But when I failed to notice it was available only on Sabado and Domingo, I figured I’d better switch to my first language. (Not that there’s a second one, mind you.) And by the way, the name is Spanish for Bouganvilia, so a Spanish translation of a french work

Instead of the pozole I chose the Birria, which is available todos los dias. Birria is basically a beef stew and is a traditional dish from the Jalisco region. This isn’t a stew like American versions — there are no carrots or potatoes or peas. But on the other hand, it isn’t made with goat or mutton, as it might be in Mexico.

Although the menu suggested it would be spicy, it was not so much. It had wonderful globules of grease floating atop the souplike broth. And the meat, in huge hunks, was good and tender. It was served with a plate of accouterments — cilantro, chopped onion, jalapeños, lime wedges — and a container of hot tortillas, wrapped in what appeared to be a dish cloth. One is meant to put some of the meat onto a tortilla, sprinkle with the condiments and make a little wrap. You may also squirt one of the sauces that are provided (I recommend it). There is a flavorful salsa verde and red sauce that the young woman who served it said is very hot. She wasn’t kidding.

I also sampled a steak taco, served simply on double tortillas.
The taco was good, but I really liked the Sopes, with carnitas and queso fresco. The thick platform was nice and crisp. It was difficult to eat with the white plastic fork that was provided, but I managed.

The surroundings are simple. There was a television in one corner playing what sounded to me to be a Spanish language soap opera. I believe someone was dying in a hospital somewhere. Despite being the only non Latino in the place, and regardless of a sign on one of the walls stating that parking was for Mexicans only, I felt comfortable and welcomed.

I’d wander in again. Maybe on a Sabado or Domingo for Pozole.