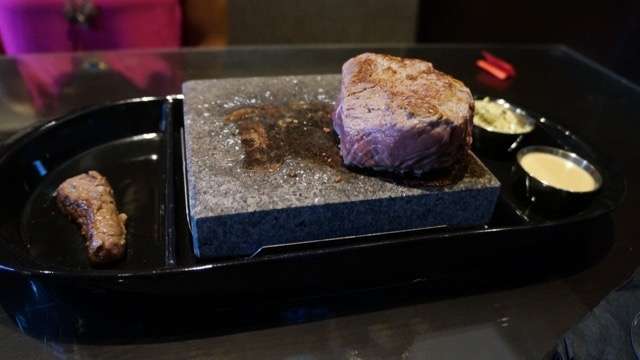 Black Rock Bar & Grill is a new restaurant whose gimmick is tabletop cooking on stones that have been heated to 700 degrees. Don’t believe me? Go ahead, stick your tongue on it.

Cooking on hot rocks isn’t new. But tabletop cooking seems to be having a resurgence in popularity, what with the growing number of Asian style hot pot and hibachi restaurants.

Personally, I don’t get it. I’ve always felt that if I wanted to cook dinner I could stay home and do it. And if I overcook my steak, it won’t cost me quite as much. And I won’t have to tip.

But judging from the full house of noisy cookers all around me, I’m in the minority. And I rather enjoyed my food at Black Rock, especially the things that I didn’t have to prepare myself.

That included an appetizer called Bubbling Shrimp on a Stone, which is best described as bubbling shrimp on a stone. Actually, the shrimp bubble in a butter sauce inside a skillet that is placed on the ultra hot stone. This one was double hot, as in temperature and spice.

The menu is quite extensive and features a number of sandwiches and burgers, all of which are prepared by professionals in the kitchen. I ordered the Rock Burger, which was a half pound of angus beef topped with bacon and mozzarella cheese as well as red onions, thick slices of tomato and bright green leafy lettuce. It was a pretty good burger, one that I think would benefit only from a better bun.

From the cook-it-yourself list, we chose the sirloin and the filet. No comparison. The filet was wonderfully tender.

The steaks are quite thick and would take a long time to cook whole on the rock, even at 700 degrees. So you’re supposed to slice off a piece, dollop some sauce on the stone, and place the slice on it for a second or two on both sides, depending how you like it.

And ultimately, if you’d rather have someone cook it who knows what he or she is doing you can request that it be prepared in the kitchen for you. I would especially recommend that option if you choose the Kobe style beef.