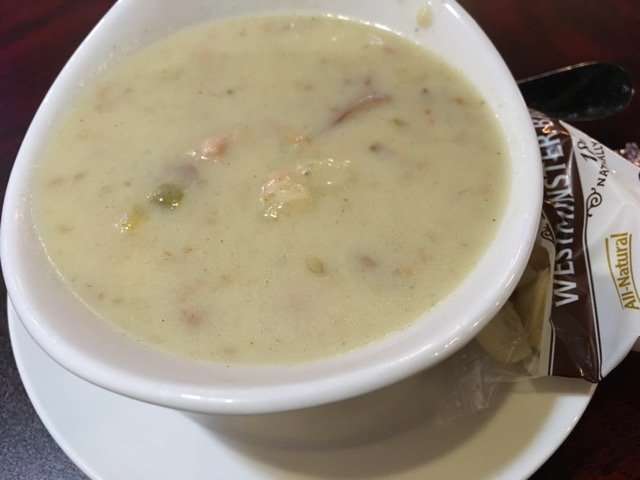 I drove out to Ocoee recently and found myself back in 1988.

Well, not really, but as I had dinner at Bates New England Seafood & Steakhouse, I couldn’t help thinking of when Boston’s Fish House opened in Winter Park. That was when good seafood restaurants were hard to come by in Central Florida, which is odd to think of today considering we’re essentially surrounded by seawater.

It’s even odder that one of the best new seafood restaurants in town back then was flying its fish in from New England.

So does Bates. And just like Boston’s before it, it features New England specialities like Ipswich or whole belly clams and seafood platters of breaded and deep-fried fish, shrimp, scallops and other things from the sea.

And it’s all done very well.

I couldn’t resist choosing the whole belly clams as part of my Fisherman’s Catch entree. You can get clam strips instead, and that might be a more appealing choice for some. As you can probably guess, whole belly clams have a rather, how shall we say, earthy taste. It will either have you savoring the pungency or asking yourself, “What the heck did those clams eat.” I’m actually not much of a fan, but they’re offered so rarely on local menus that I felt compelled to give them a try. And while it’s a taste I don’t crave, I can recognize ones that are well prepared, and these were.

So was everything else on the platter, which included sea scallops (cut in half before breading, for some reason), tender-firm shrimp (thank you for removing the tails), and a choice of cod or haddock (I chose the latter). Most people consider the two fish to be interchangeable, and they are quite similar. But they do have differences, and the fact that Bates gives a choice between the two is an indicator of how meticulous they are about their seafood.

Also, the platter, which also included a stack of fries and onion rings, is only available fried — none of that healthful broiled nonsense here. The presentation is a study of golden brownishness. The breading is delicate and non heavy, and it is deftly fried so that it is crisp instead of oily.

Bates features a full bar but the wine list is disappointing. No, let me amend that: there is no wine list.

But the food is good and so is the service. Just like the old days.