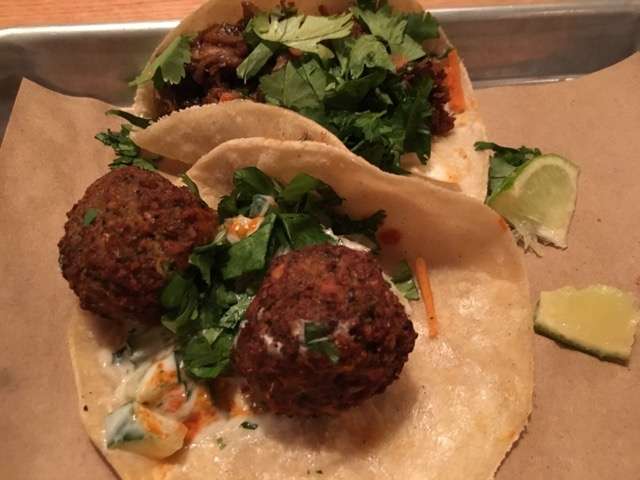 It’s one of the brands of a restaurant group called Barteca, which also has Barcelona Wine Bar and Restaurant and specializes in the flavors of Spain, Uruguay, Brazil and Southern California. So, of course it is based in Conn.

bartaco, which insists on being lower cased, offers light bites and “upscale street food” in what it calls a beachy atmosphere, if photo collages of Arnold Palmer and other golfers make you think of catching some waves.

Here’s how it works. The menu is a tiny little pamphlet with minimal descriptions. You don’t simply tell a waiter your selection. Instead, you use a small pencil — just like the golfers use! — to mark a little card with your choices and the number of each item. Sort of like at a sushi bar. Then when you’ve made your choices, you place the order card in a tabletop card holder to signal to a server that you are ready to order. Because God forbid the servers should have to pay enough attention to their tables to know that.

The food was mostly good. The Stewed Beans, essentially black bean soup, had nice hunks of pork in it though it was fairly mild flavored.

I liked the duck taco, served on a small corn tortilla with an ample handful of fresh cilantro. The meat was moist and flavorful.

I was intrigued by the falafel taco and so I ticked off the box next to that one, as well. It consisted of two chickpea fritters atop a tortilla with cucumbers, carrots and cilantro in a creamy sauce. I liked it because I like falafels, but I think I’d stick with meat items next time.

Aside from the Arnie Palmer and seaside pictures, the interior features hanging baskets that double as light fixtures, a central bar and spacious booths with wood-bench seating.

I found the young staff at bartaco to be mostly exuberant, but there needs to be training beyond plucking menu cards from the holders.