Spotlight: At Megacon, Transgender Fans Can Be Themselves Through ‘Crossplay’ 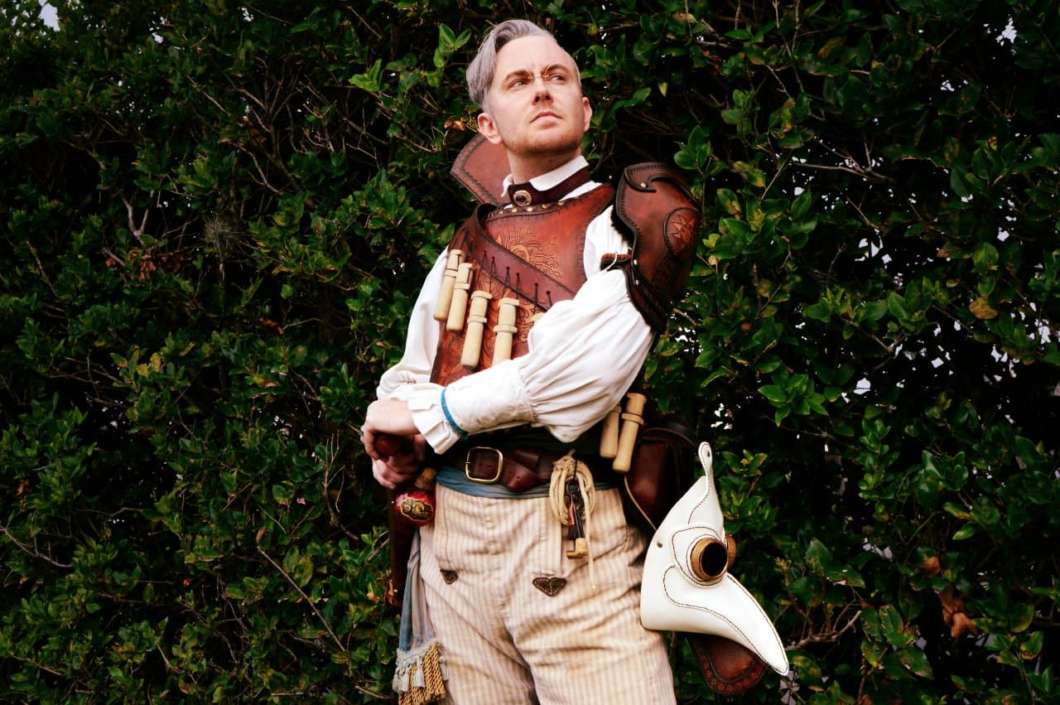 Jamie Kruger cosplaying Percy de Rolo from “Critical Role,” an animated web series where characters play Dungeons and Dragons. Kruger, a transgender man, was crossplaying before he medically transitioned, finding it a safe way to be recognized as a man: "If things went south, I could always just say it was a costume." (Photo: Dorian Kelley, @afterwits on Twitter)

On the convention floor of Megacon, a Deadpool casually browses comics while a Rick from Rick and Morty rushes past. In the distance, R2-D2 twitters happily.

The never ending parade of costumed fans let universes collide. And for some, genders collide as well.

It’s called crossplay. Crossplay is when the gender of the person wearing the costume does not match the gender of the character. Picture a Wolverine in lipstick and long hair, or a burly Black Widow with a beard.

“Back before I transitioned, I did crossplay,” said Andrea Gorney, a transgender woman and licensed mental health counselor.

“I’m also a hardcore nerd, which is why I’m here dressed as Rin Tohsaka,” Gorney said.  “Cons, and I would say also Halloween, have that acceptability where you can express yourself in a way people might perceive as weird or different. … What’s weird or different is very acceptable here.”

Transgender people are diagnosed with gender dysphoria, where they don’t feel comfortable in the gender they were born. For Gorney, crossplaying affirmed her gender expression as a woman – causing gender euphoria.

“Euphoria is the reverse,” she said, when you have those moments of feeling accepted as the gender you want to identify as.

Nearby, Jeni Hellum’s head is down as a sewing machine steadily clicks. Hellum, who goes by the name Crow, is repairing a Rikku costume from the Final Fantasy video game franchise.

Crow and partner Jamie Kruger run the Cospital Cosplay Repair room at Megacon, a free costume repair service at conventions. There’s no wardrobe malfunction the pair can’t fix – even if it needs some solder.

“We’ve zipped up a Baymax so far, we’re working on a Final Fantasy costume right now,” Kruger said. “It’ll just be steady traffic after that.”

Hellum’s latest is Zarrya, a character from the video game Overwatch. Hellum built the armor out of foam.

For both Hellum and Kruger, costuming started in childhood. In adulthood, it helped them express their gender identity.

“To the outsiders, we look like a late-20-somethings, heterosexual couple,” Hellum says, laughing.

A heterosexual couple they are not. Kruger is a transgender man. Hellum is non-binary.

“Took a little bit to get there,” Hellum said. “I was one of those kids where I was kind of gender non-conforming, but then there was a period of knuckling under in the teen years, those really hard years where you kind of have to.”

Comic conventions, the steampunk scene and renaissance festivals were safe spaces that let Hellum come to identify as non-binary.

“It started out with, ‘Oh, I’ll go to this party, this late night party at a convention in men’s clothing,’ and then it turned into, ‘OK, well maybe I’ll do an entire cosplay or entire ren fair season as a male character.’”

As a child, Kruger remembers spending weeks building a Percius costume, complete with shield and Medusa’s severed head. This was for a five-minute school presentation.

“I was definitely that kid who was super extra for school assignments where you had to dress up and for Halloween,” Kruger said. “I always made really elaborate things.”

When Kruger picked cosplay up as a hobby again in his early 30s, before he medically transitioned, he liked the combination of art and engineering. But he also realized the euphoria of spending an entire day being recognized as a man.

“I realized in hindsight that that’s something I’d been doing all along for these school projects and for Halloween,” Kruger said. “It was a safe way to explore my gender identity and my gender expression because if things went south, I could always just say it was a costume.”