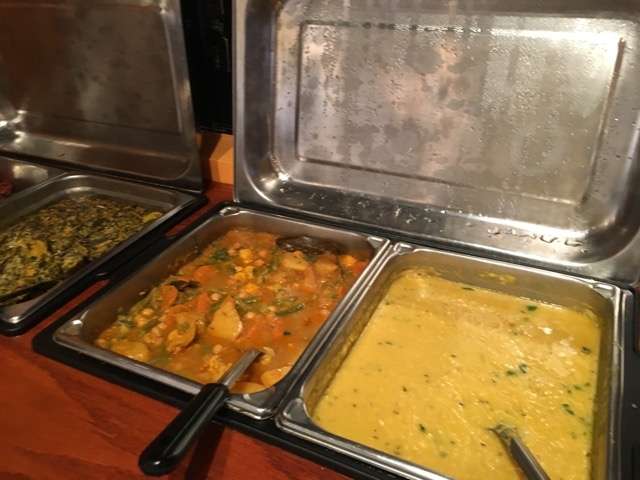 A few years ago, I visited an Indian restaurant in south Orlando, along a stretch of South Orange Blossom Trail that has been seeing a surge in Indian, Middle Eastern and other ethnic cuisines. Some are quite good; others are not. This one was meh.

In fact it was so blah and so dubious in its authenticity — asking how spicy one wants his korma is a clue — that I decided to walk away from it and not waste your time reviewing it. (That happens more times than you might imagine.) Such restaurants, I figure, will eventually fade away.

That place was called Ahmed Indian Restaurant. And not only did it not fade away, it’s opened a second location, on the east side of town.

I wish I could say that Ahmed Restaurant UCF is an improvement over the other place, but I see nothing that would change my mind enough to recommend it.

The “UCF” location is in a small strip mall that oozes dinginess.

The inside is less gloomy but not by much. It’s all very bare bones and basic.

The lunch buffet is set up in a tight corner, with one steam table for vegetarian and another for non-vegetarian. I only know this because I asked one of the staff members. Nothing on either line was labeled. Not even a sticky note.

So most guests were left to wonder what the various dishes were. They’d probably figure that one was a chicken curry. They’d guess one was goat after biting a bone. That tray probably had pakora.

Most of it was bland and unremarkable. If something is to be recommended, it was one of the vegetarian items, the Palak Paneer, spinach cooked with cubes of cheese. This one, for some reason, also had potatoes in it. But the spicing was good and multilayered. Would have been nice with something better than the dry rice provided.

Perhaps this Ahmed does a better job with items ordered off the menu in the evenings. Still, I have to continue to question the authenticity. Seriously, how many genuine Indian restaurants do you know of that have a section of the menu devoted to dishes made with beef?