Spotlight: “Actors Reaching Out” To Raise Money For Pulse Victims With Musical Tribute 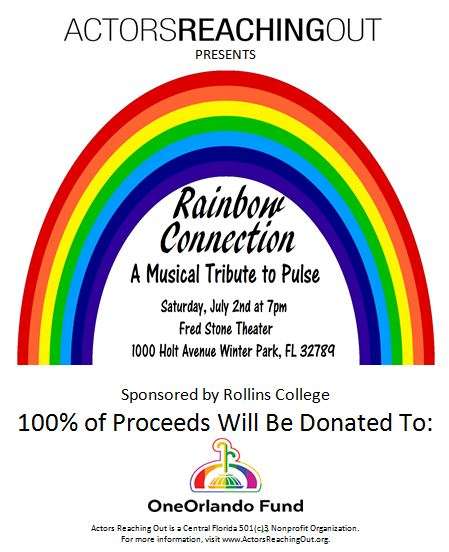 Fundraisers continue in the wake of the June 12th Pulse nightclub shooting. Among them this weekend is one at the Fred Stone Theatre at Rollins College called “Rainbow Connection: A Musical Tribute to Pulse.”

The event is put together by a local group called “Actors Reaching Out,” and all the proceeds will be donated to the OneOrlando fund.

Organizers say the production will include a wide variety.

“A Rent song, there’s one from Hunchback of Notre-Dame, things like that but we’re also doing a song by Selena and adding some Spanish in there so that we can connect with people who are mostly affected by the tragedy,” said Alliyah Corley of “Actors Reaching Out.”

90.7’s Nicole Creston spoke to Corley and the organization’s Katie Johnson. They talked about how this is expected to be a very emotional experience for the performers and the audience.

Listen to the Spotlight interview by clicking on the player above.