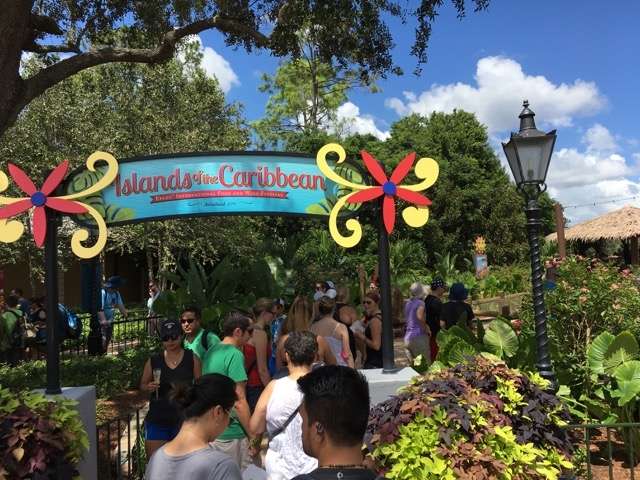 The 2016 edition of the Epcot International Food & Wine Festival is officially up and running, though given the heat of opening weekend it’s more like it’s up and slogging.

Of the new dishes I sampled, the Butter Chicken with Micro Cilantro and Naan Bread was a favorite. It can be found at the Africa Outpost.

Second favorite was the Duck Confit with Creamy Polenta and Fire-roasted Salsa. That can be found at the Greenhouse Guru, a new marketplace in the Future World West section of the park.

The Liquid Nitro Chocolate-Almond Truffle with Warm Whiskey Caramel was a hit. I can imagine the people outside at the new Chocolate Studio, also in Future World West, who might try to stick their heads in the liquid nitrogen (not to perpetuate any rumors about a certain late theme park founder).

A new feature at the festival this year is called Mix It, Make It, Celebrate It! — a series of hands-on seminars, many of them led by culinary celebrities. For example, Saturday afternoon Iron Chef Morimoto Masaharu led a sushi-making demonstration. On Sept. 28, Tony Mantuano will guide guests through the process of making orecchiette. The seminars are $49 per person, and you can find the schedule online.

Of course, it will cost you more than $49 to attend the seminar. You’ll also need a ticket into Epcot if you don’t already have one, so add a hundred bucks to the cost. But the festival planners have scheduled more things outside the park this year that won’t require admission to Epcot. For example, Brunch with a Twist, which will feature all of the chefs at Disney’s Grand Floridian Resort & Spa. At $169 per person, it’s not much cheaper than buying a ticket to Epcot and sitting in on one of the seminars. But the food experience is sure to be worth it.