Splinter The Sea Turtle Returns To The Ocean 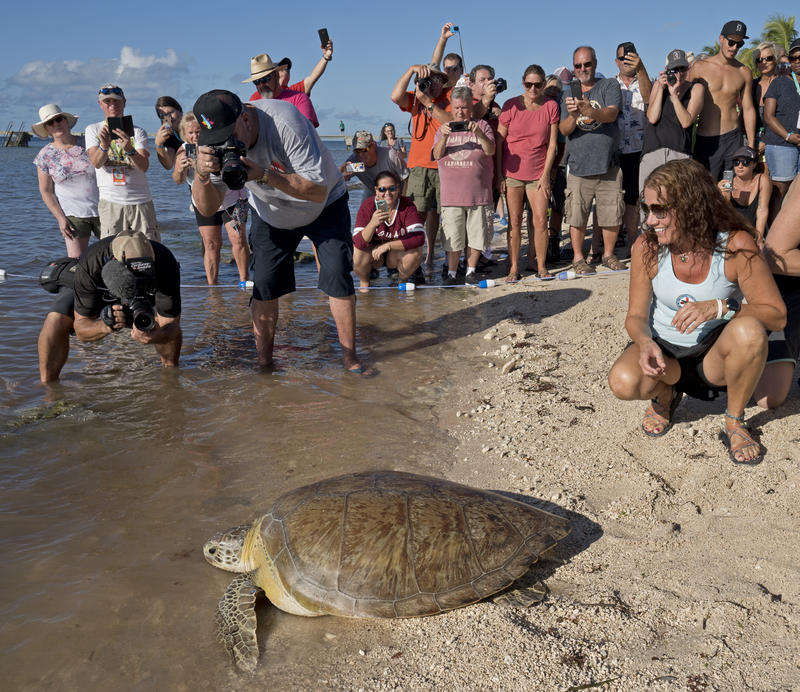 Bette Zirkelbach, right, manager of the Florida Keys-based Turtle Hospital, and spectators watch as "Splinter," a federally protected green sea turtle, crawls to the Atlantic Ocean Friday, Nov. 1, 2019, in Key West, Fla. The 150-pound reptile was rescued off Key Largo, Fla., Sept. 7, 2019, with a spear shot into its neck and was transported to the hospital where a veterinarian surgically removed it. FOR EDITORIAL USE ONLY (Rob O'Neal/Florida Keys News Bureau/HO)

Splinter the green sea turtle returned home to the Atlantic Ocean off Key West on Friday.

It was less than two months after she was found off Key Largo, tangled up in trap line and speared through the neck.

The spear didn’t hit any internal organs. It was removed at the Turtle Hospital in Marathon, where Splinter has been recovering ever since.

“This is a survivor,” said Bette Zirkelbach, manager of the Turtle Hospital.

Every turtle returned to the sea is a celebration for the hospital, but Zirkelbach said Splinter offered a more compelling case for education than most.

Sea turtles are often struck by boats, tangled in debris or suffering from fibropapilloma tumors. It’s rare for them to be hurt intentionally.

Another sea turtle that had been speared was found dead last June in Biscayne National Park.