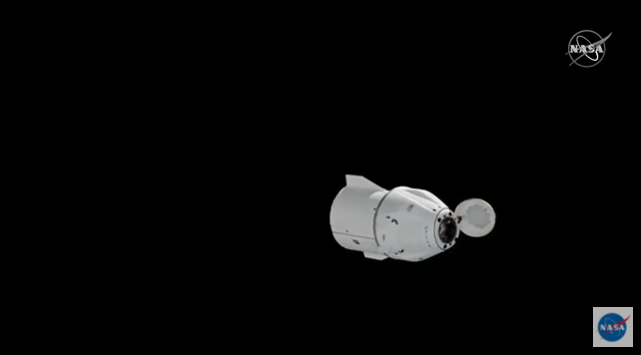 SpaceX's Cargo Dragon undocks from the International Space Station ahead of a planned splashdown off the coast of Florida. Photo: SpaceX / Twitter

After spending about a month on the International Space Station, SpaceX’s new Cargon Dragon capsule splashed down off the coast of Florida. It’s a departure from previous versions of the vehicle which splashed down in the Pacific.

The new splash zone means scientists can get their hands on their returning equipment faster, meaning they can make critical observations of experiments quicker and opening up more opportunities for space-based science.

The new cargo spacecraft is also bigger and has more power for space-based experiments — a boon for researchers conducting science on the ISS. To talk more about these new capabilities and what that means for space research we speak with Jennifer Buchli, Deputy Chief Scientist for the space station.

Then, SpaceX’s Cargo Dragon isn’t the only spacecraft opening up research opportunities for space-based science. New vehicles and more astronauts are helping bulk up the research capabilities on the orbiting lab. We’ll talk with space policy and research analyst Laura Forczyk about how the commercial sector is helping with research in space.

That’s ahead on Are We There Yet? here on America’s Space Station.