Special Olympics athlete-official from Leesburg embodies her motto: ‘Don’t tell me I can’t. I’ll show you I can’ 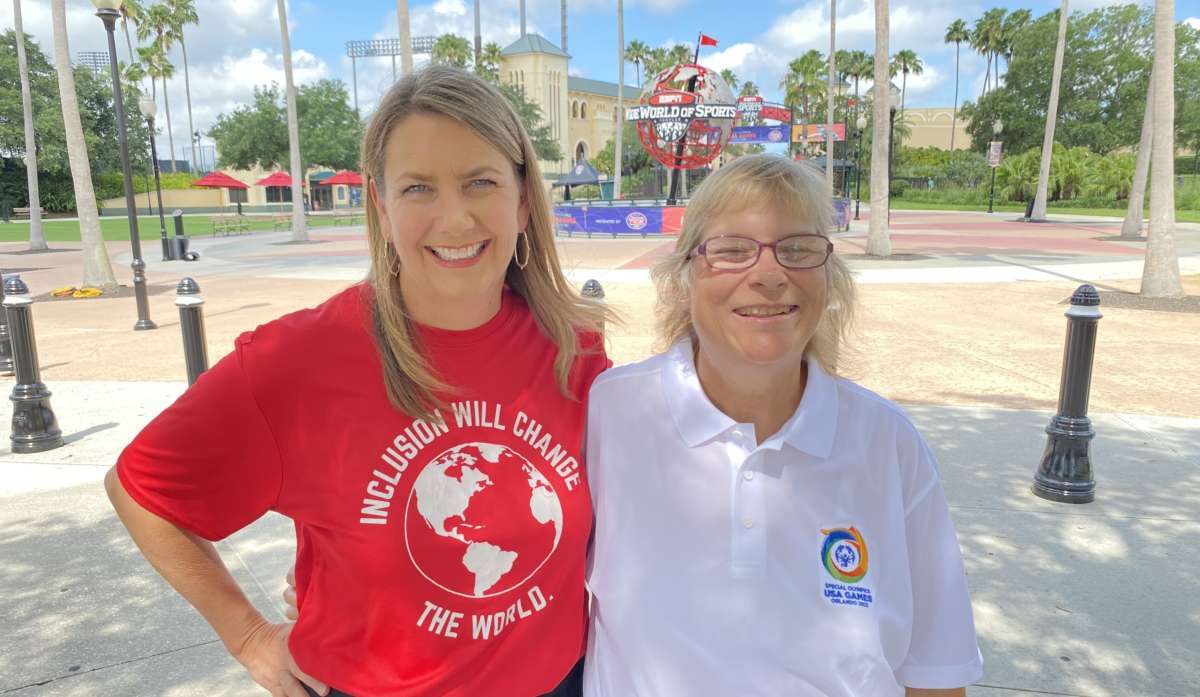 Thousands of athletes with intellectual disabilities are competing in Orlando this week at the 2022 Special Olympics USA Games.

Fifty-seven-year-old Maryann Gonzalez has been a competitor over many years in several events. She’s working as a bocce official at these games.

And as a Special Olympics athlete, game official and leader, Gonzalez is living out her message of inclusion and empowerment.

Gonzalez is a board member for the 2022 USA Games and the first athlete named to the Florida Special Olympics Hall of Fame.

She lives in a group home in Leesburg and works in the sports department at Special Olympics Florida — helping develop and promote competitions and working with databases. She brings a special awareness of needs of older athletes.

She also helps educate others on health issues ranging from eating right to brushing their teeth. Gonzalez says she speaks to doctors about how to work with intellectually disabled athletes.

Gonzalez said: “Special Olympics is my dream job because, living in a group home, you get to see how many people that need help, that need to be given the chance to go out there and showcase their skills and not just to be placed in a home or in an institution. ”

She sat down for an interview Monday along with Sherry Wheelock, the CEO of Special Olympics Florida. Wheelock calls her “a leader in the mission.”

Gonzalez first got involved in the 1970s.

“I started in Sumter County,” she said, “when my mom helped the county coordinator get started. And back then we had 3X5 cards, pink for the girls, blue for the boys.”

Gonzalez was hooked for life, she said. “It just showed me that there’s a lot of people out there with disability that really have challenges and really give it their all to do their best. And it was very important and touched my heart a lot.”

Gonzalez said she started in track and field and eventually took up volleyball thanks to an air-conditioned gym on a hot day. Her team entered the 1987 international games.

“We came in second place in the world — after two years of playing volleyball — that was incredible,” she said.

So far, Gonzalez has competed or officiated at five World games and five national games, according to the 2022 Special Olympics USA Games.

She’s certified as an official in softball, volleyball and bocce and is helping to bring pickleball to Special Olympics throughout Florida, with divisions that accommodate all skill levels.

“People that can’t always hit it over the net are not playing someone that can slam it over the net,” she explained. “So it’s very equally played.” Gonzalez wants it to be competitive and fun for everyone.

With a smile at this point in the interview, she begins to make her case for corn hole, which she points out is a professional sport.

“I just have to bring it to Miss Sherry and make it possible for Florida to have corn hole as a competition,” she said.

The reporter chirped in: “So I’m witnessing you lobbying Sherry right now …”

“You see me turn my eye,” Gonzalez said.

Wheelock says Gonzalez brings good ideas to the table all the time. For example, she was one of two athletes who years ago first advocated for the USA games themselves.