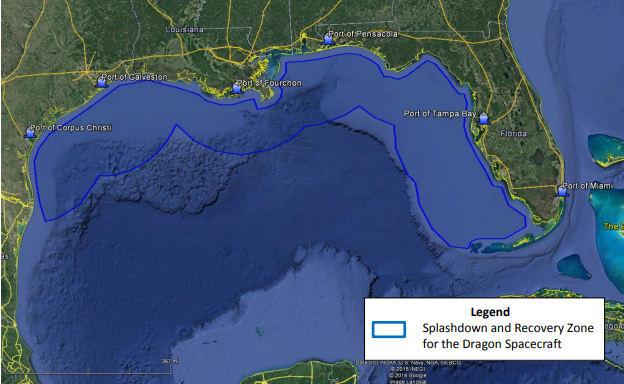 SpaceX wants to land its Dragon space capsule in the Gulf of Mexico.

After missions to the International Space Station, SpaceX drops its capsule into the Pacific Ocean where a recovery team picks it up and brings it back to land.

The capsules contain completed experiments from the station, and eventually will carry astronauts. Poor weather in the drop zone could delay re-entry, so SpaceX wants another option.

The Federal Aviation Administration drafted an environmental impact study for a second landing area in the Gulf of Mexico. The study looked at possible impacts to air and water quality, as well as the potential harm to sea life and oil rigs.

The FAA’s draft says it will grant SpaceX up to six landings in the gulf per year. The drop zones are off the west coast of Florida, as well as Alabama, Louisiana and Texas.

SpaceX ships supplies for NASA to the International Space Station. Soon, the private company will launch astronauts from Florida’s space coast. They’ll return in the dragon capsule at sea…just like the cargo.