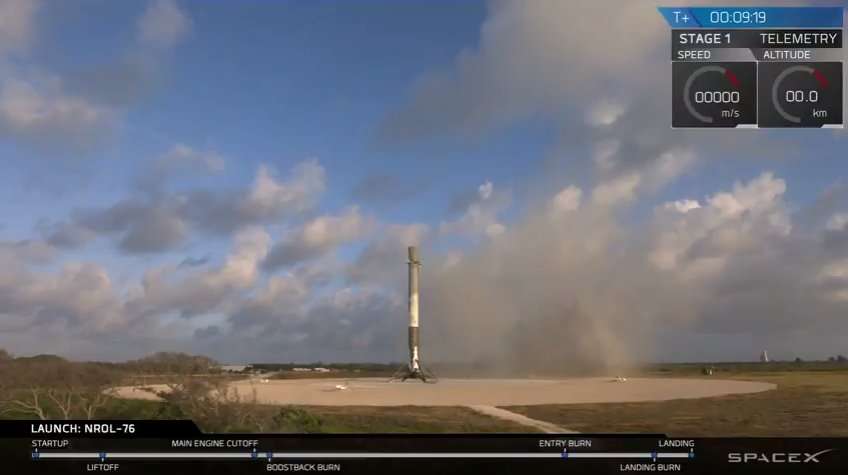 After sending a payload into orbit for the National Reconnaissance Office, SpaceX landed the first stage booster at LZ-1. Photo: SpaceX

SpaceX successfully launched a top-secret spy satellite into orbit from the Kennedy Space Center Monday and landed the first stage booster back at Cape Canaveral.

A previous attempt was call off Sunday as an issue with a sensor on the rocket forced officials to call a hold about 52 seconds before scheduled liftoff. The rocket was recycled for Monday’s launch.

The Falcon 9 rocket delivered a top-secret payload for the National Reconnaissance Office into, an intelligence gathering agency inside the Department of Defense. The NRO provides satellite intelligence data for national security and “innovative overhead reconnaissance systems.”

Upper level winds threatened the launch. SpaceX Founder Elon Musk said it was “tough call” to give the GO Monday “as high altitude wind shear was at 98.6% of the theoretical load limit.”

About 9 minutes after the launch, SpaceX landed the first stage booster at LZ-1, a landing facility at Cape Canaveral. SpaceX hopes to lower the cost of launches by reusing parts of the rocket. During SpaceX’s last launch, founder Elon Musk said the company attempted to recover the payload fairings – the nose cone on the top of the rocket that protects the payload. Previously, the fairings were discarded in the ocean.