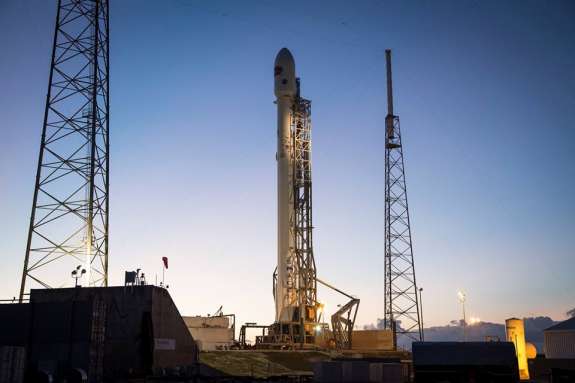 DSCOVR, on board SapceX's Falcon 9 waits on the launch pad. Photo: NASA KSC

The satellite will provide broadcast and telecommunication to areas of Asia and the Pacific.

SpaceX completed a successful test fire of the Falcon 9’s engines earlier this week, the company said in a tweet.

After sending the satellite to orbit, SpaceX plans to recover the first-stage booster by landing it on a barge at sea. An attempt to land the booster on a drone ship at sea was a success last month.

Officials with SpaceX aren’t optimistic for a successful landing this time. Thursday’s launch is to a Geostationary Transfer Orbit, meaning the booster will experience extreme velocity and high heat on re-entry.

Thursday morning’s launch window opens at 1:21 AM EST. Weather forecasts early in the week predict an 80% change of launch.

SpaceX’s last launch was in April, delivering supplies to the International Space Station.