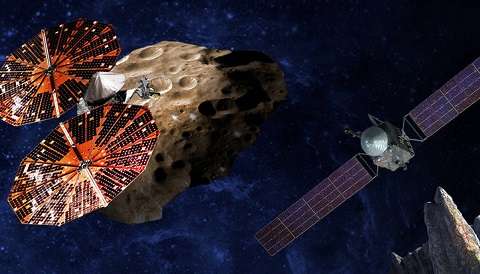 An artist's conception of the Lucy and Psyche missions exploring their targets. NASA/SwRI/SSL/Peter Rubin

SpaceX is disputing NASA’s selection of a competitor for a mission to launch a spacecraft to the asteroids of Jupiter. The private space company has filed a formal protest with the Government Accountability Office.

A SpaceX spokesperson said the company’s bid was dramatically lower and the contract awarded to ULA is “not in the best interest of the Agency or the American taxpayers.” The challenge to NASA’s selection is the company’s first.

The mission is scheduled to launch in 2021 and is complex. If the spacecraft doesn’t launch within a very narrow window of some 20 days, scientists will have to wait nearly a decade to launch again.

In an online discussion on the website Reddit, ULA’s CEO Tory Bruno said the company has “the best on time record in the industry.” Launches are usually purchased about two years before the mission blasts off. While most rocket launches are prone to delays, Bruno said for ULA contracts the difference between the first promised launch date at the start of the contract and the actual liftoff is less than two weeks.

SpaceX was recently certified by NASA as a Category 3 launch vehicle, meaning the company can launch the agency’s most complex scientific missions. The agency looked at factors like probability of success when awarding the certification. According to SpaceX, the company launch 40 missions over the last two years, accounting for 60 percent of all US launches in 2017 and 2018.

The GAO has until May to make a decision on the procurement action protest. Until then, NASA has stopped work on the mission. “NASA is always cognizant of its mission schedule, but we are not able to comment on pending litigation,” said NASA’s Tracy Young.

The Lucy mission, which is targeting a launch in October 2021, will complete a 12-year journey to seven different asteroids in the solar system. The mission is part of NASA’s Discovery Program which funds low-cost, highly-focused scientific missions with a budget capped at around $450 million.