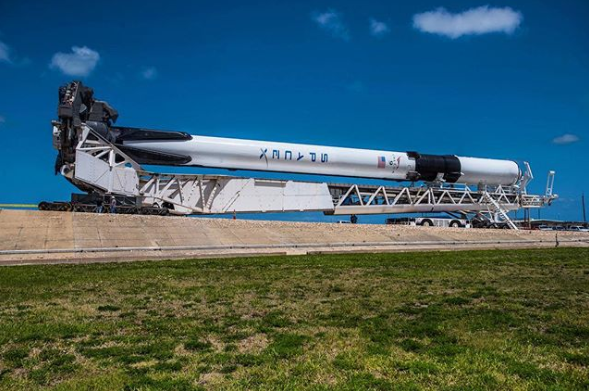 SpaceX is set to launch a Falcon 9 rocket Thursday from the Kennedy Space Center. It’s the newest version of the booster.

The Block 5 version of the Falcon 9 is built for reusability – it has upgraded fins to steer the booster as it lands back on Earth or on a barge at sea and it has upgraded engines and landing legs.

It’s all a part of founder Elon Musk’s vision to lower the cost of access to space by reusing parts of the rocket.

So far, SpaceX has recovered and reused a handful of boosters. But with these upgrade, SpaceX wants to recycle these rockets possibly up to a hundred times.

The Block Five will also launch NASA astronauts to the International Space Station as a part of the Commercial Crew progam. NASA pays SpaceX and another partner Boeing to ferry astronauts to the ISS instead of relying on rides from the Russian space agency. SpaceX will need to launch about a half-dozen of the Block 5 rockets for NASA’s stamp of approval.

But there’s been some tension between NASA and SpaceX about how to go about fueling the rocket ahead of a launch of astronauts. SpaceX uses super-cooled liquid oxygen and kerosene to fuel the Falcon 9. By lowering the temperature of the propellants, they become more dense and can load more fuel onto the rocket. That increases the rocket’s efficiency.

But to do that, SpaceX needs to load the fuel as close to launch as possible. The practice, called “load and go,” is considered risky by NASA’s human spaceflight standards. SpaceX said that it takes human safety seriously and will meet and exceed any safety standards set by NASA ahead of uncrewed and crewed test flights later this year.

The Block 5 version of the Falcon 9 is a testament to founder Elon Musk’s goal of lowering the cost of access to space. By recycling parts of the rocket, Musk and SpaceX can substantially lower the cost of a launch.

Thursday’s Falcon 9 launch is sending the first satellite for Bangladesh into orbit. As the cost of launches drops, more budding space programs can get a leg up when it comes to getting satellites into space.

The launch of the first Block 5 is targeting a two-hour launch window opening at 4:12 p.m. from Kennedy Space Center. Weather remains favorable.