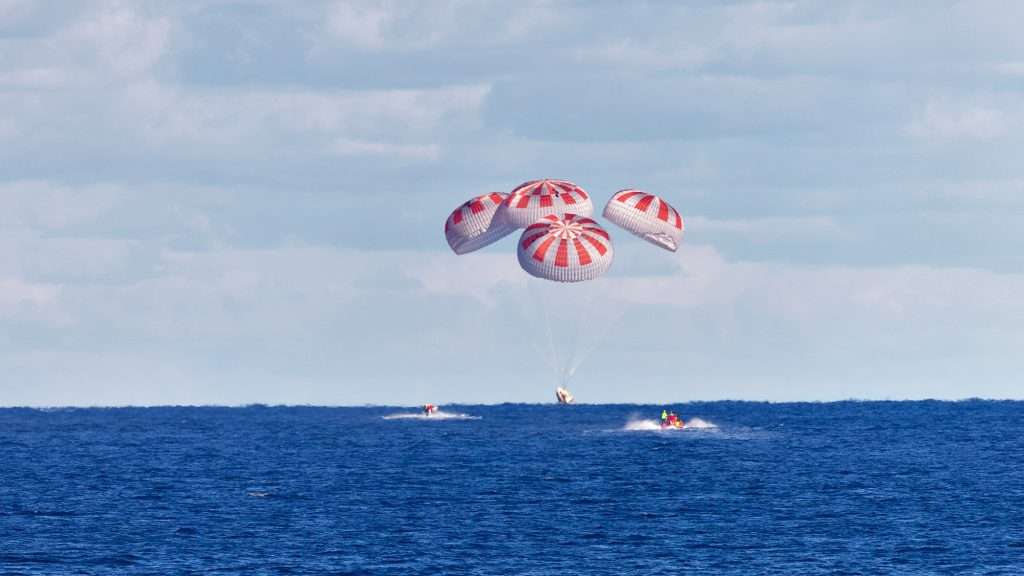 SpaceX’s first Crew Dragon parachutes to a splashdown in the Atlantic Ocean during the uncrewed Demo-1 mission on March 8, 2019. Photo: SpaceX

NASA’s Bob Behnken and Doug Hurley will return to Earth Sunday after a two-month stay on the International Space Station. The capsule will splash down in the Gulf of Mexico off the coast of Pensacola.

Behnken and Hurley’s capsule named Endeavour undocked from the station Saturday evening. The two spent some time adjusting the orbit of the capsule for reentry and even got some sleep overnight. To wake them, NASA played an audio message from the astronauts’ sons.

The duo arrived at the station after launching from Kennedy Space Center May 30. It was the first human launch from the U.S. since the end of the Space Shuttle program in 2011 and the first time a commercially built and launched vehicle carried NASA astronauts.

Conditions currently remain GO for the primary targeted site, off the coast of Pensacola, and alternate site off the coast of Panama City in the Gulf of Mexico for splashdown and recovery. Other target sites off the Atlantic coast were scrapped due to Tropical Storm Isaias.

Parachutes will slow the capsule down from 17,500 mph while in orbit to just 15 mph at splashdown.

It’s the first planned splashdown of a spacecraft since 1975. A recovery boat station in the Gulf and staffed by NASA and SpaceX personnel will scoop up the capsule and astronauts. A team will perform a medical check before the duo makes the trip back to Johnson Space Center in Houston, Texas. SpaceX completed an uncrewed version of this mission last year.

The crewed mission is a critical test for SpaceX and NASA under the agency’s Commercial Crew program — an effort to rely on private companies to launch astronauts to the International Space Station, ending a nearly decade-long reliance on the Russian space agency Roscosmos. If all goes well on this mission, another crew of three NASA astronauts and one Japanese astronaut is scheduled to launch from Kennedy Space Center later this year.

Sunday’s splashdown is scheduled for 2:48 p.m. EST and is streaming on NASA TV.