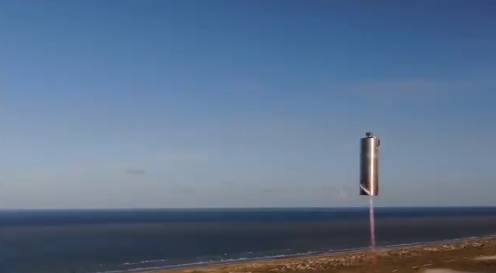 A test flight in Boca Chica, Texas might be a small hop for SpaceX’s prototype rocket but it’s a giant leap in the company’s ambitions towards launching vehicles to the moon and Mars.

It was the first flight of SpaceX’s full-size prototype of its Starship spacecraft. Founder Elon Musk is leading his team of engineers designing the vehicle, with the ultimate goal of using the spacecraft to send humans to Mars.

“Mars is looking real,” tweeted Elon shortly after the test.

The prototype flew Tuesday to under 500 feet for about 40 seconds before landing at a nearby landing pad. The stainless steel vehicle was propelled by SpaceX’s next-generation Merlin engine. Musk said the final iteration of Starship will use 6 of these engines and aims to carry up to 100 people.

Starship will get a big boost into space using a larger rocket booster called Super Heavy. Musk said SpaceX is still deciding on a launch site for those launches, which could include Kennedy Space Center or SpaceX’s manufacturing and test facility in South Texas.

While Starship is part of Musk’s Mars ambitions, NASA is interested in its development for landing humans on the moon. The agency awarded SpaceX a developmental contract to design Starship to land NASA astronauts on the moon.