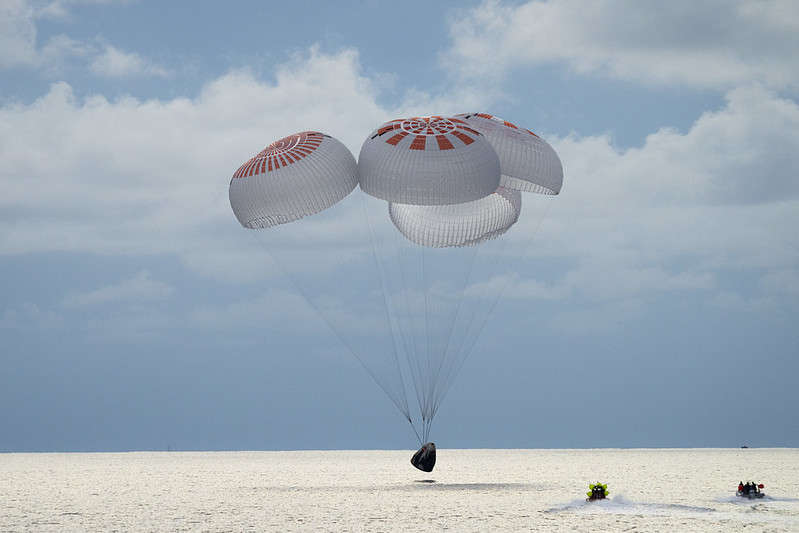 Four parachutes slow the decent of SpaceX's Crew Dragon capsule carrying the Inspiration4 astronauts before splashing down off the coast of Florida. Photo: SpaceX

Engineers are taking a closer look at the parachutes on SpaceX’s Dragon capsule after a chute was delayed opening on a cargo splashdown last month. NASA and SpaceX are reviewing data ahead of a planned astronaut mission in April.

SpaceX’s Dragon spacecraft uses the same parachute system for both its human and cargo missions. During a splashdown of cargo last month, one of the capsule’s four parachutes lagged in deploying. A similar delay happened back in November during a crew splashdown.

SpaceX says the delayed chute didn’t affect the speed of the capsule’s return and both missions splashed down safely, but the company will still take a closer look.

“I think this is just a normal thing,” says SpaceX’s Bill Gerstenmaier. “We’re learning and we take advantage of the data we get on each one of these flights. Can it teach us something? Or can we learned something from this that actually helps make us better and safer for the future?”

The capsule could safely land with only three of its four parachutes deployed. While the parachutes were delayed during deployment, all four have opened for every mission.

“But even though the system is operating correctly, we’re not happy with that,” says Gerstenmaier. “We kind of keep looking and seeing if we can understand better how the system actually operates, and understand where the weaknesses are in this system so we can have a safer system for crews moving forward.”

NASA says there’s no reason for concern and plans to move ahead with the launch of four astronauts – three from the U.S. and one from Italy — in April, launching from Kennedy Space Center in Florida.