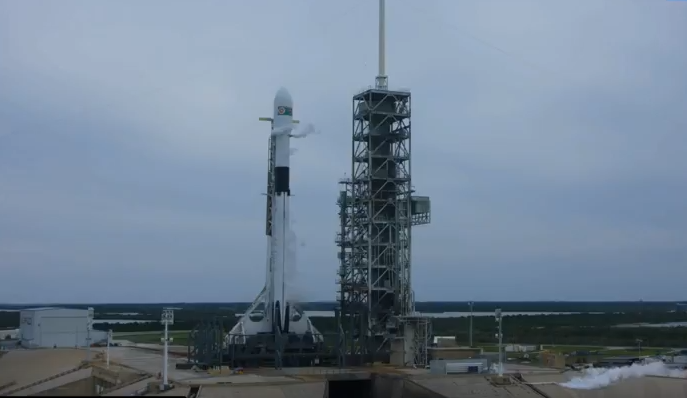 An attempt to launch Bangabandhu Satellite-1 on Thursday was scrubbed. Photo: SpaceX / YouTube

The launch of SpaceX’s upgraded Falcon 9 rocket will have to wait another day before launching from the Kennedy Space Center.

Just seconds before liftoff from Launch Complex 39-A, the Falcon 9’s flight computer stopped the countdown. An issue with a system on the ground forced the scrub.

SpaceX is taking extra precautions with this flight. It’s the first launch of an upgraded booster, called Block 5, and it will eventually carry astronauts to the International Space Station.

SpaceX founder Elon Musk says NASA is keeping a close eye on the launch and the agency asked the company to over-engineer the rocket to make it safe for humans. “Think of the worst possible scenario that the rocket would encounter then add 25 percent to that,” said Musk. “The rocket has to be designed 25 percent more than the expected load that in the case of a satellite launcher.”

NASA will study this launch and the next half dozen launches of the Block 5 rocket before giving it’s stamp of approval. The agency asked Musk and SpaceX for thousands of design specifications and redundancies on the rocket to make it rated for human astronauts. “I’m stressed,” said Musk ahead of Thursday’s launch attempt. “Any good wishes would be appreciated.”

In a tweet, SpaceX said the rocket and its payload, a communication satellite for the county of Bangladesh. are in good health. SpaceX will target another launch attempt Friday starting at 4:14 p.m.

Standing down today due to a standard ground system auto abort at T-1 min. Rocket and payload are in good health—teams are working towards tomorrow’s backup launch opportunity at 4:14 p.m. EDT, or 20:14 UTC.