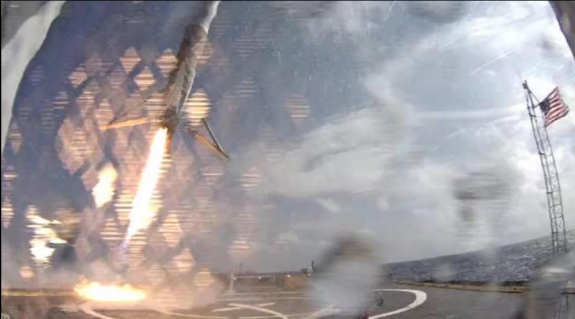 The rocket hit the target, but came down with too much force causing it to tip over. Photo: Elon Musk, SpaceX

SpaceX attempted to land the spent first stage of a Falcon 9 rocket on a floating barge Tuesday off the coast of Jacksonville.

And they got really close. The rocket hit the target and landed, but tipped over.

“It came down and landed too hard. I saw two frames and that was the end of it. We’re still looking at data and need to analyze what happened,” said SpaceX Vice President Hans Koenigsmann.

The test is one step in an ambitious goal to reuse parts of the Falcon 9 rocket, thus decreasing the cost of commercial space launches.

Despite the failure, Koenigsmann is optimistic. “I’m pretty sure we’ll figure this out and make it work on the barge. It’s just a matter of finding the right parameters and method to do this, I don’t think it’s anything fundamental,” he said.

Atop the Falcon 9 was SpaceX’s Dragon capsule. It’s heading to the International Space Station with supplies and experiments including espresso machine – aptly named the ISSpresso – to help astronauts deal with homesickness.