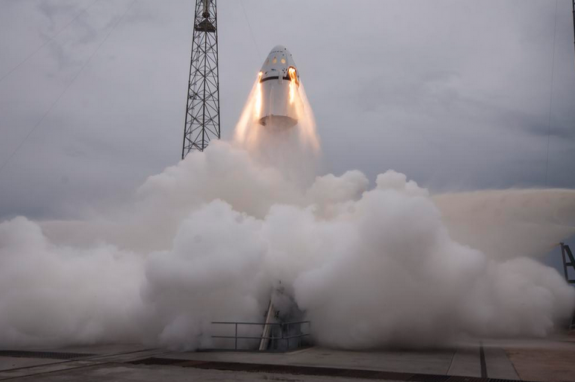 CRYSTAL: So – what are they actually testing?

CRYSTAL: Why is this crucial to SpaceX and NASA’s commercial crew program?

BRENDAN: As a part of their commercial crew contract, SpaceX needs to prove to NASA they meet certain safety requirements – a launch abort system being one of them. NASA is cautious when it comes to safety. The Space Shuttle had no practical means of a crew abort – something the Challenger disasters reminded us all of.

CRYSTAL: Don’t other spacecraft have a similar safety feature?

BRENDAN: Yes and no. If you think back to the Mercury and Apollo rockets, you’ll remember those tall pointy towers on top? Well, that was the launch escape system. If those astronauts needed to get off the pad quick, that solid rocket fired and pulled the capsule to safety. With SpaceX’s system, the liquid engines are mounted on the side. There’s a few perks to this – those thrusters can fire at any time during the flight in case of emergency. They can also be used for maneuvers once safely in space, and possibly to help the craft land without a parachute. It should also be noted that Boeing – the other company working with NASA on their commercial crew program – employs the same type of system on their crew capsule.

CRYSTAL: What happened during the test.

BRENDAN: Well it was quick. The test started from launch complex 40 The eight engines fired simultaneously, each producing about 15-thousand pounds of thrust. They fired for 6 seconds, propelling the capsule from 0 to 100 miles per hour in about one second. The capsule reached a height of about 15-hundred meters – just shy of one mile up – and splashed down about a mile-and-a-half from the pad.

CRYSTAL: Was anyone on board?

BRENDAN: No, this was an unmanned flight. But they do have a dummy on board to measure g-forces on future passengers.

CRYSTAL: Does he have a name?

BRENDAN: They were calling him “Buster”, but said he would remain unnamed. They didn’t want people confusing him for the dummy on MythBusters!

CRYSTAL: What’s the takeaway here? What are they hoping to get out of this test?

BRENDAN: Quite a bit, Crystal. Aside from meeting the NASA safety criteria I mentioned earlier, they have about 270 sensor to collect data from the flight. They’re interested in seeing how the eight engines work together and how they respond to real-time date.

CRYSTAL: What’s next for the Dragon Crew capsule?

BRENDAN: Later this year, SpaceX plans another abort test. This time, from atop a Falcon 9 rocket in midflight. That will happen out of California. They’ll also send an unmanned Crew Dragon to the International Space Station. They’re hoping to start sending manned missions into space starting in 2017.