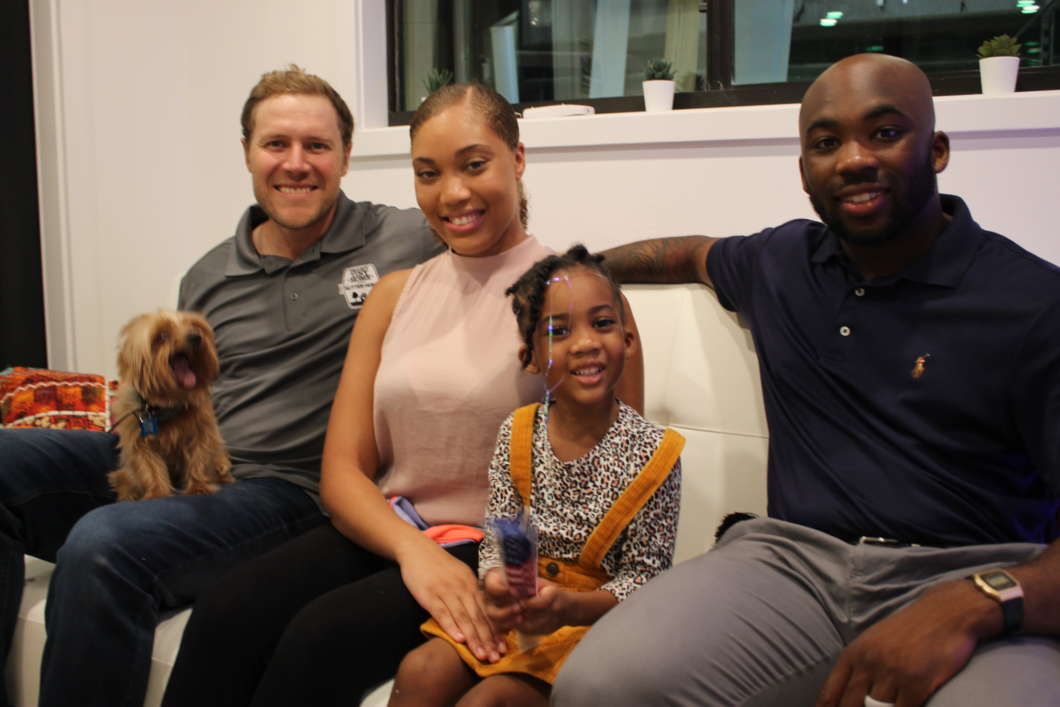 (Left to right) Co-Host Zach Giffin, Shanice Iniss, Kevin Iniss, and their daughter. Kevin and Shanice Iniss and their young daughter share a seat inside their new home which will be featured on Tiny House Nation. Photos by Jason Delgado for WMFE.

After months of saving and sacrifice, a homeless Space Coast family is finally settling into a tiny home of their own with the help of a popular television show and a non-profit organization.

“Words just won’t describe how it felt to walk through the doors, see that home, and sit in our bedroom and know this is ours,” said Iniss.

Kevin Iniss, a six-year member of the Air Force, said he and his family made many painful sacrifices to put together a down payment for a new home after being forced from their home in the wake of Hurricane Irma in 2017. From re-purposing a VW van into a home to showering at gyms, and — perhaps hardest of all — sending their daughter to live with grandparents, the family cut nearly all their expenses to achieve their dream of home ownership.

Operation Tiny Home  — a housing nonprofit that serves struggling community heroes, victims of natural disasters, and those who struggle with housing instability — provided matching grant money for the down payment.

Homelessness is an ongoing problem across America including in Central Florida, but Tiny House Nation Co-Host Zach Giffin says tiny homes can be a reasonable approach to America’s housing crisis.

“It’s fantastically rewarding, not only just to put a deserving military couple into a home, but also to be part of setting a precedent to demonstrate to the rest of the world what a solution that is attainable looks like.”

Tiny House Nation will air the family’s story on Netflix and A&E.