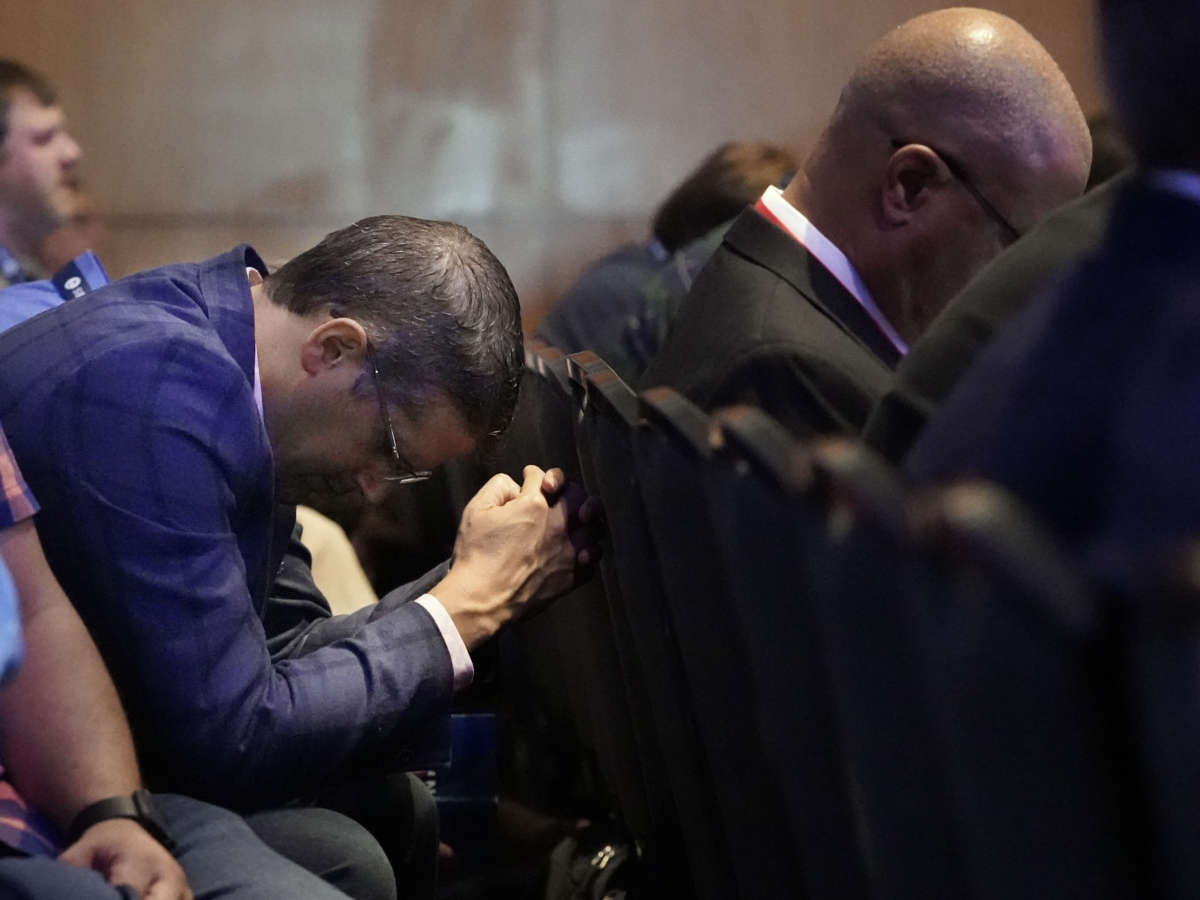 Southern Baptists are gathered in Nashville this week for an annual meeting that could prove a turning point, as the faithful square off on an array of divisive issues that some fear could drive a wedge into the largest Protestant denomination in the U.S.

Tuesday marks the first full day for the event in which the voting members of the Southern Baptist Convention could tackle high-profile issues including racial discrimination, gender inequality, and sexual abuse.

The organization is one of the U.S.’s most politically influential. It has long aligned itself with conservative causes and top evangelicals in the convention enthusiastically backed former President Donald Trump.

This week, the Southern Baptist Convention’s voting members will choose a new leader for the group — a decision that could either signal a continuation of the status quo or set the stage for a more conservative ideological shift.

The spotlight was already on SBC leaders as they entered this week’s convention. Last week, Russell Moore, a former president of the SBC’s Ethics and Religious Liberty Commission, or ERLC, posted letters and secret recordings of internal SBC meetings that critics have said shows the denomination’s top leaders were slow-walking reforms that would address sexual abuse. Moore has parted ways with the church.

In 2018, the Southern Baptist Theological Seminary, the denomination’s flagship institution, issued a report on the role that racism has played in the leadership and how support for slavery helped shape the denomination in its earliest days.

An effort to address sexual abuse was blocked

The SBC announced last week that it hired Guidepost Solutions, an independent investigation and risk-management firm, to review the group’s handling of internal abuse issues.

However, during the SBC executive committee meeting on Monday, leaders rejected a request by Texas pastor Jared Wellman to amend its agenda to consider expanding the third-party investigation of the leadership’s handling of sexual abuse claims.

Wellman’s amendment would have required the SBC to appoint an independent task force to receive the full report from Guidepost and relay its findings to the entire convention.

Executive Committee Secretary Joe Knott argued that such a step would violate Baptist policy by handing “essentially unlimited power” to an outside party, according to Baptist Press. Knott also said the proposal wouldn’t stop sexual abuse.

The issue is reportedly not dead and critics of the move have expressed outrage over the executive committee’s inaction. On social media, a group of people who say they faced sexual abuse within the denomination shared an open letter to the leadership demanding change.

The majority of the Southern Baptist membership remains white, and it is less diverse than U.S. protestants overall, according to Pew Research Center.

When the executive committee voted in leadership elections Monday, Rolland Slade, the committee’s first Black chairman, was reelected to a second one-year term without opposition.

But little else about the denomination reflects diversity, critics say.

Dwight McKissic, a pastor of the Cornerstone Baptist Church in Arlington, Texas, spoke with NPR’s Morning Edition last week of his concern with the recent move within the SBC to ban the teaching of critical race theory at its seminaries.

In a controversial move last year, the Council of Seminary Presidents of the Southern Baptist Convention affirmed in a statement that while the seminaries condemn “racism in any form,” they agree that “affirmation of Critical Race Theory, Intersectionality and any version of Critical Theory is incompatible with the Baptist Faith & Message.”

The statement caused a backlash among some Black pastors, causing several to leave.

Women in SBC are struggling to find a place in leadership

The SBC forbids women from becoming pastors, although some congregations have ordained them.

The executive committee punted on an amendment vote to form a task force “of gender and ethnic background to study the biblical authority and biblical viability of a woman serving or not serving as the SBC president.”

The SBC’s Book of Reports for this year’s convention — which contains reports from SBC entities and recommendations from the executive committee — recommends not making changes to its statement of faith, know as The Baptist Faith and Message, regarding the role of women.

“My optimism is very low that the SBC is going to move on the issue of women preaching, teaching or leading,” Beth Allison Barr, a history professor at Baylor University, told Morning Edition last week.

According to the Book of Reports, the organization will continue to lobby on its conservative political positions, lauding the SBC’s recent efforts to join in “cases against an abortion industry that has attempted to use the pandemic as a pretext for their horrific agenda.”

ERLC also affirmed that it plans to “continue to work tirelessly to defund Planned Parenthood.”

“We will do this to protect American taxpayer dollars from the largest abortion provider in the country,” according to an ERLC statement in the Book of Reports.

ERLC said it opposes the Equality Act — which prohibits discrimination based on sex, sexual orientation, and gender identity in public accommodations, education, federal funding, employment, housing, credit, and the jury system. The bill recently passed the House but faces an uncertain future in the U.S. Senate.

ERLC has also expressed opposition to the Fairness for All Act, a bill introduced in 2019 that supporters say is aimed at prohibiting discrimination on the basis of sex, sexual orientation, or gender identity, while providing certain benefits and exemptions to religious providers.