South Florida’s Seminole Cowboys: Cattle Is ‘In Our DNA’ 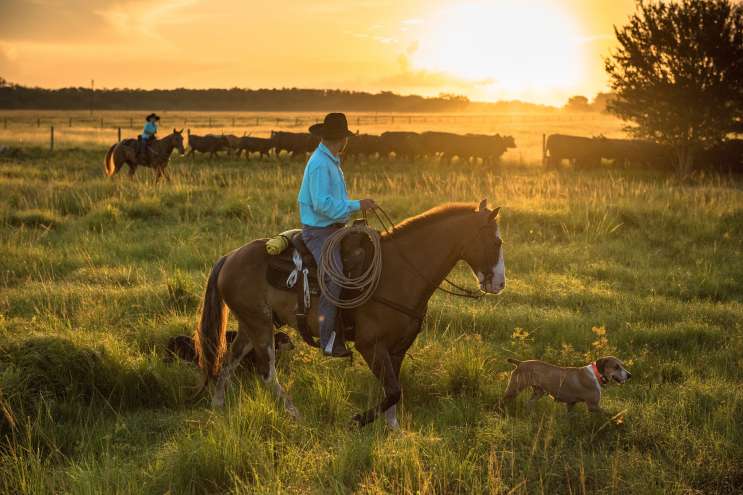 Chris Green, a tribal member, and his son, get the dogs out early to round up a herd at Big Cypress Reservation.
Image credit: Carlton Ward Jr

Recently, on a hot summer morning with cumulus clouds towering overhead, black cattle grazed in South Florida fields, dotting the horizon along with clumps of palm trees. At the Big Cypress Reservation, Moses Jumper is a tribal elder and owner of nearly 300 head — and a fourth-generation cattleman.

“A lot of people look at us as wrestlin’ alligators, and the casinos and all that. But a lot of people don’t realize we’ve been deeply involved with cattle all the way back to the 1700s and 1800s,” says Moses Jumper, beneath pictures of his forbears wearing Seminole tribal dress. “Cattle in my family goes all the way back to my great uncles. My grandmother and grandmothers. They were all cattle people.”

On the Seminole reservations of South Florida, July and August are cattle roundup time. Cattle roundups and cowboys usually bring the Old American West to mind. But the first cattle, historians believe, entered what is now the U.S. through Florida with the Spanish Conquistadors in the 1500s. The earliest Florida cowboys were native people. And they’re still at it. Florida, with its lush grasslands, ranks tenth in the nation for its beef cattle herds — nearly two million head. The Seminole Tribe of Florida, Inc., is a major player in the cattle industry.

The tribe likes to say cattle is “in our DNA,” ever since Ponce de Leon brought over Andalusian cattle over in 1521. And certainly, by the late 1700s, explorers chronicled the many thousands of head belonging to the great Seminole leader, known as “Cowkeeper.” But those historic herds were all but wiped out in wars against the Seminoles in the 19th century, which nearly took the tribe out, too. The Seminoles persisted, however. (So did the original cows, which are known as “Florida Cracker cattle” — but they’re just for show.)

“I don’t know if we were the only — but one of the few — that never did sign a peace treaty with the U.S. government, ” says Alex Johns, natural resources director for the tribe. “We wasn’t recognized American citizens.” All Native Americans have been U.S. citizens since 1924. “So, even though we’d been living here for 10,000 years, we were considered enemies of the state.”

The 36,000 acre Brighton reservation, with an abundance of grassland and natural roughage, is 75 miles north from Big Cypress, near Okeechobee. It’s where the modern cattle herd was begun in the 1930s, even before the Seminole Tribe of Florida was federally recognized and incorporated in 1957. Alex Johns, 42, was born at Brighton, and is an officer with the Florida Cattlemen’s Association.

“We got the [U.S. Government] to quit killin’ us. They acquired this property and worked with us to have cattle — they actually brought cattle in from the Apache Mescalero reservation,” said Johns. “And that was the carrot that got my people to come to the Brighton reservation.”

Those Apache cattle weren’t nearly adequate, and many died. It took decades of trial and error, different breeds and better genetics for the Seminoles to get the quality reputation they have today. The Seminoles raise a hardy breed called “Brangus,” a cross between Brahmin and Black Angus — about 10,000 of them. They’re sold on the internet in the spring. They have tags in their ears tracing their lineage. And every summer, over a two-week period, roundup comes at first one reservation and then the other, including all the family cattle-owners as one big collective. This year, there were 67 families participating.

This is Florida, and it’s super-hot. Even before first light, cowboys in pickups show up with their horses, a few wearing spurs and some wearing white rubber boots and spurs. The white boots, called “Lakeport Loafers,” are for swampy water. Spurs are jingling. The herd dogs are already baying loudly. Skeeter Bowers, a cattle owner and tribal member at Brighton, loves it. “To the average person, when they think Florida, they think of Mickey Mouse and sunny beaches. But this is the real Florida.”

Here, are the savannas — the grasslands — and they stretch as far as the eye can see. Skeeter Bowers stands in a pen in front of hundreds of noisy, lowing calves at Brighton’s sorting pens, and does a kind of play-by-play.

“You’re going to hear, ‘heifer heifer heifer — cow-cow-cow,’ and ‘steer-steer-steer’.” What he means is, the maturing “feeder” calves are being separated from the “momma” brood cows, and at 500 pounds and up, the seven and eight-month old calves are ready to be sent to feed lots and buyers.

They come thundering down various lanes. Cowboys sort them out with hands, hats, and cattle prods. Three generations often work together, like Stanlo Johns, 82, his son, Todd, 46, and assorted grandchildren.

“You’ve got to do what you love,” says Stanlo. He credits the University of Florida with helping the tribe. Son Todd is jumping to the fence rails to avoid getting trampled, as cattle, four or five at a time, rush past. Stanlo’s younger brother, Norman, called “Dad,” holds up a finger — one for steers, two for heifers (female cows under a year old.) Into the pens they go, and later, to the weigh station and then the livestock trucks. The cicadas whine and cattle low.

At Big Cypress, there’s a a dramatic breakaway one morning in the Jumper fields. Moses and Naha Jumper moved the herd from one pasture to another, using their four-wheel ATV’s, when “resistors” had other ideas, bolting towards the oak forest. Cowboys go chasing after escaped cows on horseback, only to give up when some of the cattle jump through a barb wife fence.

“We’ll get ’em tomorrow,” he grins. “Let’s get some lunch.” He’s been chasing after cattle on an ATV all morning, and it’s heading towards 100 degrees.

Lunch each day is a giant potluck including traditional foods like Indian fry bread, pumpkin fry bread, Spam and tomatoes, and sometimes a corn drink called Sofki. Everyone, cowhands, foremen, family owners and guests eat together. Moses Jumper leads everyone in a cowboy prayer.

“Let’s all take our hats off,” he says gravely. There are a lot of cowboy hats.

“Father, we’re breaking bread together — we know you’re the creator of all things. We pray you keep us safe in the cow pens, and we pray the cattle be safe. Cowboying is a tough job — but Father, we pray for your protection, in Christ’s name.” Gathered around him are granddaughters and grandsons. He hopes they’ll all be cattle owners as he is.

This year, the tribe had a lot to be grateful for. Heavier calves, filling 40 trucks, bound for feedlots out West meant a gross of at least three million dollars. It’s not casino profits, but it’s legacy. But, Moses says, most people aren’t doing it for money, and there’s years when he hasn’t made any on cattle. In recent years that’s changed, but it’s not the whole point.

“I get out there on my four-wheeler with my dogs, and it’s the place for me to be. I enjoy it. Hopefully when the Lord calls me home they’ll find me out there in the fields, doing what I love to do.”

That sounds like it could be a cowboy from anywhere. In this case, it’s a Seminole Indian Florida cowboy.

Reporting for this story comes in part from the Florida Humanities Council and Florida Cultural Resources, Tarpon Springs.