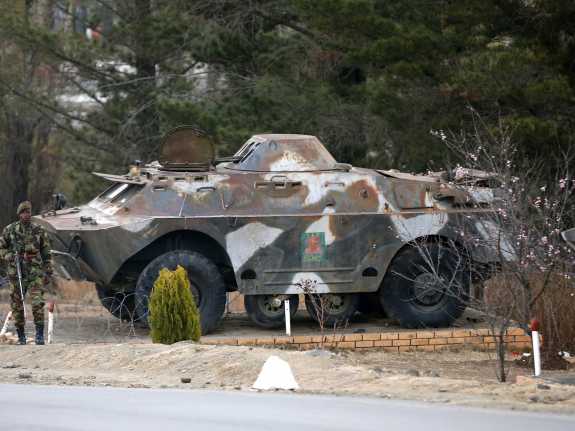 A member of the Lesotho military looks on as he stands guard in front of an armed personnel carrier at the entrance of the army barracks in the capital Maseru on Saturday. Lesotho's Prime Minister Thomas Thabane has accused the army of staging a coup.
Image credit: Siphiwe Sibeko

South Africa has condemned an apparent coup in Lesotho, an independent kingdom within its borders where the army appears to have seized power, driving out the prime minister. Lesotho’s defense forces, however, have denied a takeover.

Lesotho’s military seized two police stations Saturday as gunfire rang out in the capital of the mountainous kingdom. The military justified the move by saying that police planned to arm factions at an upcoming demonstration in the capital, Maseru. An army spokesman denied a coup and said the army had returned to the barracks.

“Political tensions have been high in the tiny kingdom … since June when there was a power struggle after Prime Minister Thomas Thabane suspended parliament to dodge a vote of no confidence.”

“Early Saturday, Prime Minister Thomas Thabane was forced to flee across the South African border to escape the violence.”

“By all accounts the actions of the Lesotho defense force bear the hallmarks of a coup d’etat,” South African Foreign Ministry Spokesman Clayson Monyela told reporters.

“We are calling on the commander of the armed forces to return to the barracks and allow the democratically elected government to return to its business,” Monyela said.

“The situation in Lesotho is still unfolding. No one has claimed to take over government … so we are monitoring that … our interest is to see it resolved through peaceful means,” Monyela was quoted by the AP as saying.

The news agency reports: “Thabane told South Africa’s eNCA television that the military actions amounted to a coup. He said he did not give permission for the action and that something like this should not be happening in a democratic state. He is going to meet with South African officials, and expects South Africa to help his government restore law and order, he said.”