Something Is Missing In Iowa As Democrats Once Again Debate: A Clear Favorite 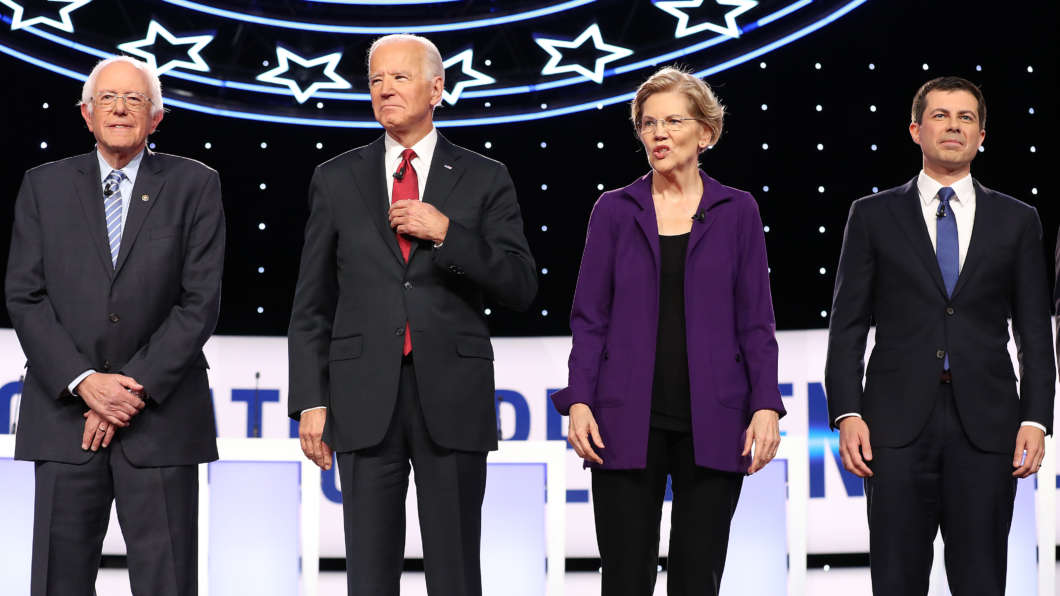 Bernie Sanders, Joe Biden, Elizabeth Warren and Pete Buttigieg appear at the start of the Democratic debate at Otterbein University on Oct. 15 in Ohio. The four enter Tuesday's debate as the top contenders in Iowa.
Image credit: Chip Somodevilla

Viewers tuning in for the latest Democratic presidential candidates’ debate Tuesday night may sense something missing in Des Moines.

For starters, the well-lit stage on the Drake University campus may seem half-empty. There will be only six candidates raising their hands and vying for airtime. That’s less than a third as many as qualified for the first round back in June. At that point, the debate was held over two nights with 10 different candidates onstage each night.

Most of the original crew have dropped out, including all the governors, Sen. Kamala Harris of California and former Cabinet Secretary Julián Castro of Texas. Others have been excluded as the qualifying criteria — poll standing and fundraising — have grown tougher.

Among the missing on Tuesday are some of the more memorable presenters from earlier debate stages, such as Sen. Cory Booker of New Jersey and businessman Andrew Yang. Both are still running but missed the cut on polling performance. Without them, the debate will not have even one person of color.

Those who remain will, as always, strive to differentiate themselves from each other while proving they have what it takes to defeat President Trump in November. Iowans will have their chance to weigh in on that question in three weeks during the party’s precinct-level caucuses on Feb. 3.

And that suggests something else that may seem missing Tuesday night: a clear favorite. The well-respected Des Moines Register/CNN/Mediacom poll now has Sen. Bernie Sanders of Vermont leading in Iowa, but the average of polls nationwide and in other early voting states still shows a modest preference for former Vice President Joe Biden.

At this point, it is possible to imagine either emerging from the early voting states as a bona fide front-runner in time for Super Tuesday on March 3, when 14 states will vote, including delegate-rich California and Texas.

But it is also possible to imagine neither of them doing so, and thus to imagine Super Tuesday as a hodgepodge of conflicting results.

Testing the candidates is, of course, the first order of business in Tuesday’s debate. But also at issue is the trajectory of the Democratic Party in the state and the region and the importance of Iowa itself in the nation’s politics.

While we’re at it, let’s add that the entire system of defining the party’s field of candidates through televised debates and early voting in selected, albeit less populous, states is on trial as well.

Perhaps the one finding in the latest Des Moines Register/CNN/Mediacom poll that no one would dispute is this: The two most prominent progressives in the race — Sanders and Elizabeth Warren — were the first choice among 37% of those surveyed. The three leading contenders in the more moderate space — Biden, former South Bend, Ind. Mayor Pete Buttigieg and Sen. Amy Klobuchar of neighboring Minnesota— also totaled 37%. The longstanding division within the party’s ranks seems alive and well and remarkably even.

Iowa surely reflects that division, but it differs from the national Democratic Party in important ways. Nationally, the Democrats are increasingly the party of younger voters and people of color. Iowa is statistically older than most states and more than 90% white. (The same can be said of New Hampshire, the state that always holds the nation’s first primary, where the population is 93% white and older than any state’s but Maine.)

For TV viewers, Tuesday’s confab among candidates will be a CNN show, heavily promoted by that cable news operation. But in Iowa, it is widely known as the Des Moines Register debate, closely identified with that traditional newspaper and its longtime, outsize influence in the Hawkeye State. The paper has long sponsored a debate that was a significant factor in the caucuses’ outcome.

The Register has been a strong advocate for the caucus format over the years, noting among other things that it has “picked the nominee” on the Democratic side in nine of the 11 cycles beginning in 1976 — Jimmy Carter twice, Walter Mondale, Bill Clinton, Al Gore, John Kerry, Barack Obama twice and Hillary Clinton.

The only exceptions came when a native son, Sen. Tom Harkin, dominated the caucus tally in 1992 and when Richard Gephardt of neighboring Missouri won in 1988. Second-place finishers have also gained significantly on their way to winning New Hampshire’s primary, including Sanders in 2016 and Gary Hart in 1984.

The Register’s poll, directed by Ann Selzer, showed Sanders with his first lead in the state on Friday. The Register poll has had the eventual Democratic caucus winner on top in each of the last six presidential cycles.

But the poll also showed Sanders to be the first choice of just 1 Democrat in 5, with three other candidates closely bunched just behind him. Sanders had 20%, Warren 17%, Buttigieg 16% and Biden 15%.

Joining this quartet on Tuesday night will be Klobuchar, who was the first choice among 6% in the poll, and billionaire businessman Tom Steyer, whose late ad blitz in targeted states enabled him to meet the polling and donor thresholds for inclusion in the debate.

Steyer would not have made the stage based on his Iowa standing, however, as the Register poll found him at just 2%, behind Yang at 5% and even Booker at 3%. Late-starting media mogul and former New York City Mayor Michael Bloomberg is not taking donations so he is not in the running for the debates. Six more debates are scheduled, three in February alone.

Much of the poll discussion focused on how both Warren and Buttigieg had fallen back since their impressive moves to the front of the Register poll in 2019. Warren still had the highest favorability rating among Democrats — 70% found her either “very” or “mostly” favorable — but had given ground to Sanders in the months since he came back from his October heart attack.

Sanders’ camp was quick to tout the Register poll, and to point to more good showings elsewhere. But given the 3.7-point margin of error, it could be said the race was statistically close to being a four-way tie. That should help keep curiosity and enthusiasm high for the devotees of the leading candidates and encourage turnout — a test of which candidate has the best “ground game” as well as the most fervent supporters. Sanders’ fans have long been known as fiercely loyal, but Warren and Buttigieg are credited with building impressive organizations to manage caucus night.

High motivation is more important here than usual because these are not simple voting events. They are true caucuses, party meetings, that require a time commitment and a degree of engagement with one’s neighbors on a weeknight deep in winter darkness.

Selzer, the poll director, found 45% of Iowans interviewed said they were still open to persuasion and 13% had yet to arrive at a preference. “The caucus process is an invitation to keep an open mind,” she said.

At the Democrats’ caucus events, held in a variety of public and private venues, each candidate needs to muster support from at least 15% of the participants to remain “viable.” Those whose candidate does not meet this threshold are free to support another candidate. Thus the tally taken at the end of the evening represents only the final choices, which may differ from the initial preferences.

That is a system that some find off-putting. But Iowa Democrats have remained attached to it, in part to avoid conflict with New Hampshire and its codified “first in the nation” primary. Both major parties have ceded this first-caucus, first-primary status to Iowa and New Hampshire, respectively, attempting to counter-balance the two states’ demographic tilt by also scheduling Nevada caucuses and South Carolina’s primary in February.

Will this year’s flood of Super Tuesday votes wash away the relatively few actual delegates committed in February? Or will the cue effects of Iowa and New Hampshire drive the next rounds of voting all the more?

Tuesday night may begin to fill in some of the missing information.