Some Yemenis Struggle For U.S. Visas Even After The End Of The Travel Ban 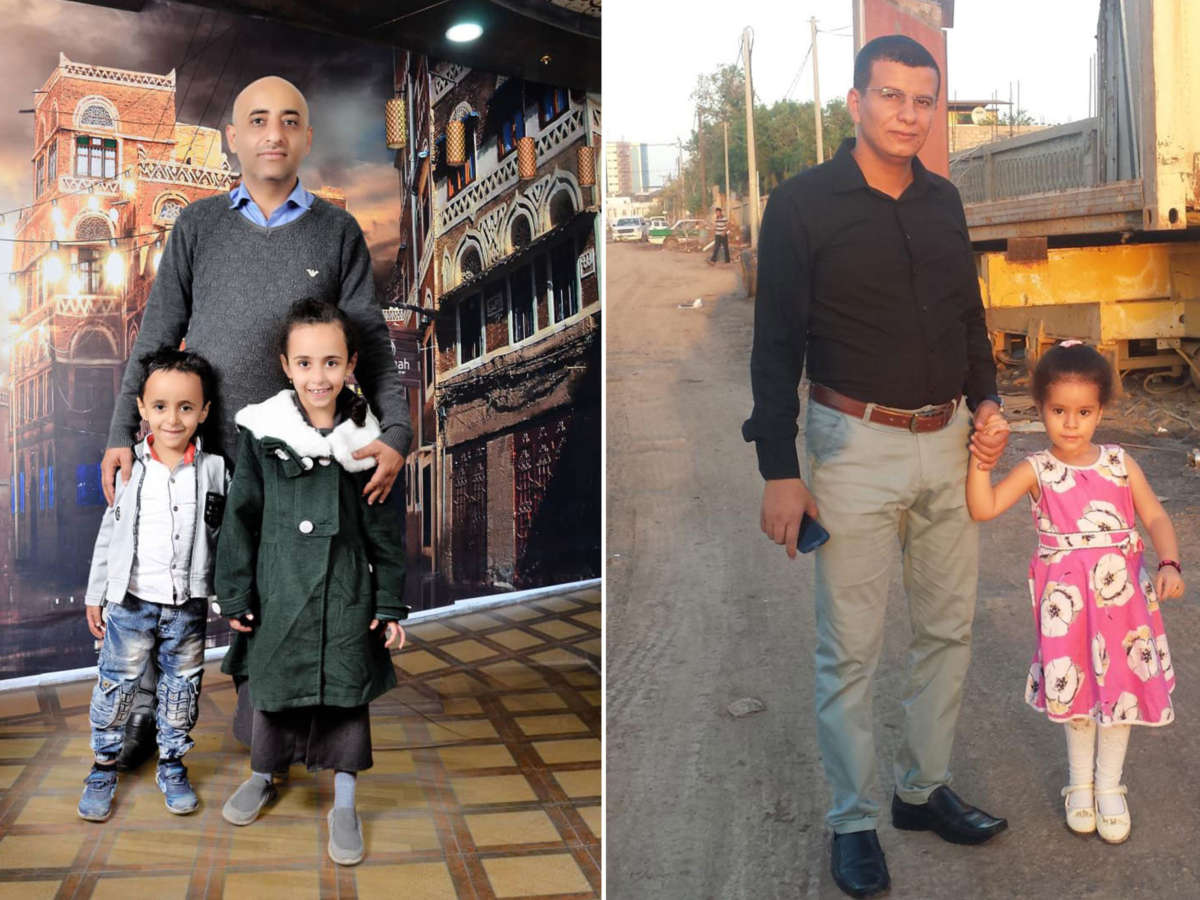 Left: Anwar Alsaeedi stands with his children, Nada, 9, and Mazeen, 6, in the Yemeni capital Sanaa. Right: Hatem al-Showaiter with his daughter in Djibouti, when his daughter was three and half years old. She is now aged seven and half.

BEIRUT — When the U.S. government offered Hatem al-Showaiter and his wife Reema the chance to emigrate from Yemen to America in 2017, they decided to risk everything to make it happen.

To get passports, they made a harrowing trip with their daughter, then three, across front lines in Yemen’s long-running civil war. Then, to process their family’s visas, they were instructed to go to the U.S. embassy in Djibouti, some 270 miles across the Red Sea. The American embassy in Yemen has been closed since 2015.

To raise the money for their trip to Djibouti — $8,000, much more than they could afford — they sold a dental clinic they owned. When that wasn’t enough, they borrowed from friends.

There was reason for hope.

But now, almost four years later, that hope has largely vanished. The Showaiters are still living in Yemen. They are among thousands who won a U.S. government lottery but were later denied entry to the U.S. due to the travel ban imposed in 2017 by the Trump administration, which targeted citizens of Yemen and several other Muslim-majority or African countries.

On his first day in office, President Biden repealed the ban, calling it “a stain” on America’s national consciousness. But his administration is still denying entry to some of the most vulnerable people affected by that ban — people like the Showaiters.

The family’s home city of Taiz has been devastated and they’ve been rendered destitute since they were first promised a better life in the U.S. Showaiter, 36, says he spends nights listening to the shell fire that sometimes lands close to home: “Stray bombs hit in residential areas,” he tells NPR, speaking via an internet connection that he had to walk more than a mile to find. “They’ve killed children. This is our day to day.”

In 2017, the Showaiters were invited to apply for the U.S. Diversity Immigrant Visa Program, which grants up to 50,000 visas to people from countries that are underrepresented in the U.S. immigrant population. Applicants often come from impoverished countries or war zones.

The Showaiter family received an invitation for an interview at the U.S. embassy in Djibouti for Oct. 31, 2017. By that time, the Trump administration’s travel ban was in place. When Showaiter went to the embassy on that date, he says officials took the family’s passports and he was given a piece of paper, seen by NPR, telling them to check their visa status online.

Showaiter says he was never contacted by the embassy again. When the family tried to go in person, they were not allowed in.

After five months of waiting, they could no longer afford to remain in Djibouti. Because the U.S. embassy still had their passports, he says they obtained emergency travel documents from the Yemeni consulate to return to Yemen.

Both the U.S. embassy in Djibouti and the State Department tell NPR they cannot discuss individual cases because visa records are confidential under U.S. law.

President Biden’s repeal of the ban means many people with other kinds of visas can reapply or have their cases reassessed. But these don’t include thousands of diversity visa recipients whose visas expired during the ban. Their only option, the administration says, is to return to the lottery — where they may spend years applying and never be selected.

“Instead of restoring the once-in-a-lifetime opportunity that is the diversity visa, President Biden dusted off Trump’s ‘closed’ sign and locked the door behind him,” says Manar Waheed, a lawyer with the American Civil Liberties Union who has worked to highlight the situation.

In a written statement, a State Department official tells NPR that the law provides that diversity visas can only be issued in the same fiscal year in which applicants are selected in the lottery program. Under current law, expired visas cannot be reinstated.

“We are constrained in several ways by U.S. law or current regulations,” the official says.

But Waheed argues that the administration could seek to change the law or work around it. For example, it could offer people like Showaiter and his family humanitarian parole, which allows foreign nationals to come to the U.S. for a temporary period because of an urgent humanitarian reason.

She says once they’re in the U.S., people like the Showaiters could then explore further options to legally remain.

“The Biden administration could do this, given the incredible harm of the bans and the fact that people won a literal lottery and then were denied because of bans that this administration says were discriminatory, wrong, unconstitutional,” Waheed says.

“Our lives have been destroyed by what has happened,” Anwar Alsaeedi, 43, tells NPR by phone from the Yemeni capital Sanaa. “I really have no hope that my family can recover from this here. There’s nothing in Yemen now.”

Alsaeedi spent 16 years applying to the diversity visa lottery. His efforts paid off in 2017. Like the Showaiter family, Alsaeedi and his family were advised to go to the U.S. embassy in Djibouti to process their visas.

Alsaeedi, his wife Reem — then pregnant — and their two young children crossed front lines to get from Yemen’s capital Sanaa to Aden. Houthi militias interrogated the family for hours, accusing Alsaeedi of trying to defect to the other side.

“The entire time, there were war planes flying overhead and war around us,” he says.

Alsaeedi says the family sold everything they had, including a small piece of land and Reem’s jewelry. Like the Showaiters, they borrowed money from friends, promising to repay them once they set up a new life in the United States.

Based on the experience of others who’d won diversity visas, Alsaeedi expected the interview at the U.S. embassy in Djibouti to be a final step before traveling to the U.S. Instead, he says, the interviewing officer simply handed him a letter — which NPR has reviewed — saying the family’s visas were denied because of Presidential Proclamation 9645, Trump’s executive order banning immigrants from Yemen and elsewhere.

“Why call us? Why make us pay the costs for the interview, for the test, for the travel to Djibouti and go through the whole routine, only to refuse us at the very end?” Alsaeedi says.

The Alsaeedis waited for weeks in Djibouti, hoping the U.S. Supreme Court would reverse the travel ban. When that didn’t happen, they had no choice but to make a dangerous trip back to Sanaa.

With almost no savings left, they had to return by sea. Some 27 hours into the boat journey, Reem suffered a miscarriage.

Before they left Sanaa, Alsaeedi had to give up his job as a bank teller. Since his return, it’s been impossible to get the job back. These days, he sometimes works as a day laborer, assisting another construction worker since he knows little about building.

Before their lottery win, he says, the family was financially stable. Now Alsaeedi says he’s had to pull his children out of the private school they used to attend because he can no longer afford the fees. The family avoids buying expensive food like meat. And he still has to repay his loans.

Alsaeedi hoped his family would finally get their visas when President Biden reversed Trump’s travel ban. With renewed vigor, he and others in his position organized an online campaign, tweeting to President Biden their thanks and pleas to reinstate their visas, with the hashtag #I_Want_My_Miracle_Back.

Then the administration announced it would not consider applicants whose diversity visas expired during the Trump ban.

“Our situation is devastating,” Alsaeedi says. “We don’t know what to do.”

In the absence of alternatives, he says he’ll keep writing appeals on Twitter, hoping someone pays attention.