Social Distancing At Hogwarts: My First Time Back At Universal Orlando Resort 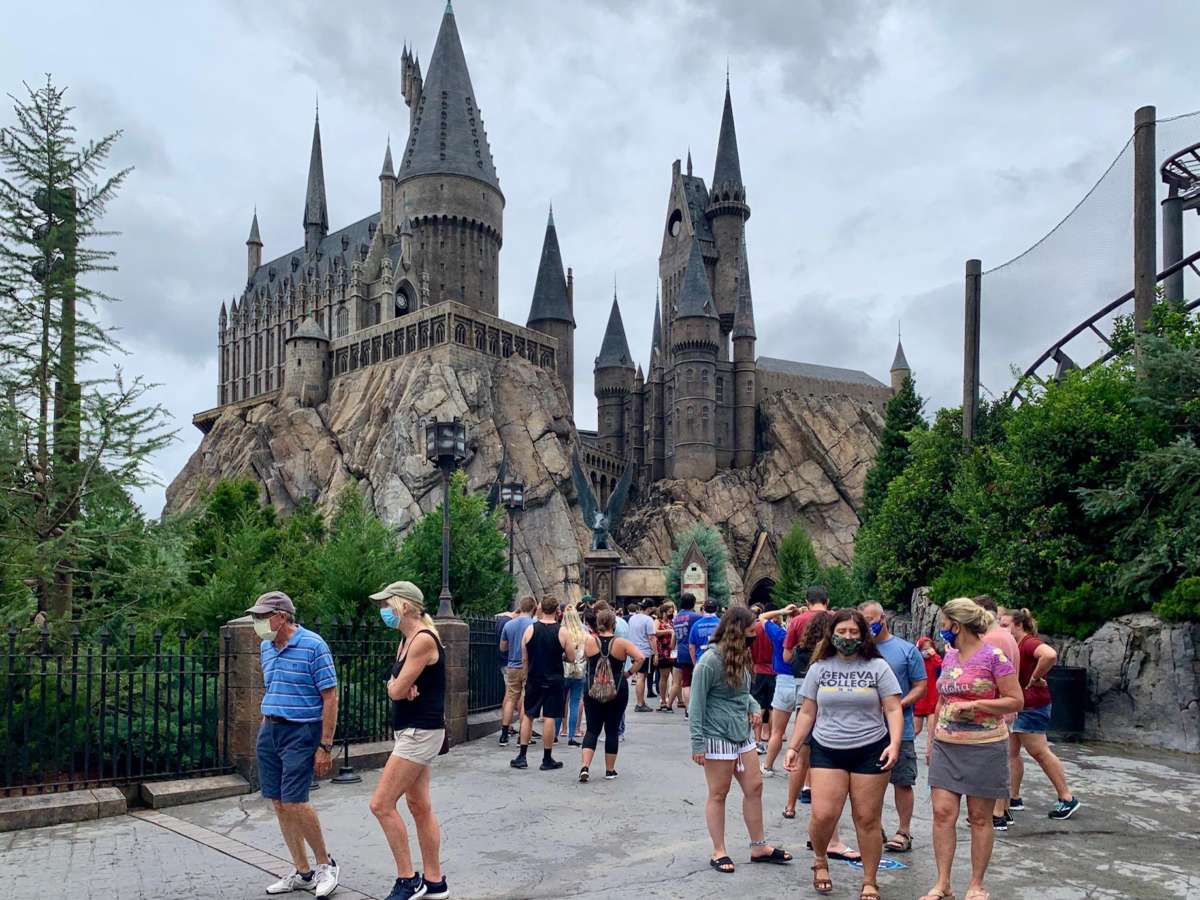 The Universal Orlando Resort theme parks are reopening today after being closed for more than two months due to the coronavirus pandemic.

I’m an annual passholder, so I got to enter Universal Studios and Islands of Adventure a couple days early along with people staying at the resort’s newly reopened hotels.

I wasn’t sure what to expect – would I feel safe? Would it even be fun? Turns out, yes and yes, but that doesn’t mean I’d actually purchase admission any time soon.

I’ll give bullet points for people who are curious, but if you’re a theme park fan like me and want a more in-depth idea of what to expect, that’s below as well.

Keep in mind this is based on my personal experience as a park guest not a news reporter.

Here’s how my day went:

Arriving at the parks

Passholders had to reserve entry times to attend the preview days. The park opened at 9 a.m. but my reservation time wasn’t until 11 a.m.

Staff members wearing masks directed me to a parking spot, and as soon as I got out of my car, I put a face covering on as well.

If your temperature was 100.4 degrees or higher you were not allowed to enter.
CREDIT STEPHANIE COLOMBINI / WUSF PUBLIC MEDIA

Besides the masks, temperature checks are the first new safety measure you’ll notice when you arrive at the park.

Staff members held scanners up to guests’ foreheads to record their temperatures. If it’s higher than 100.4 degrees, you’ll have to get back in your car and go home. This process was quick for me, but I heard others who arrived earlier waited in long lines.

As you proceed through security toward the parks, you’ll hear recorded messages over the loudspeakers reminding people to stay clean and practice physical distancing. Signs placed every few feet provide similar instructions.

Signs like this were posted all around the park reminding people about safety guidelines. The blue circles on the floor were also placed around the park in areas where lines were expected to maintain six-feet distancing.

If you don’t already have the free Universal Orlando app downloaded on your phone, I’d highly recommend it as it makes things like checking wait times, signing up for virtual lines and ordering food much easier. That was the case before the pandemic, but it’s especially important now.

I eagerly opened my app, hoping to get a spot in the virtual line for Hagrid’s Magical Creatures Motorbike Adventure, the rollercoaster that opened in the Wizarding World of Harry Potter last June that I had yet to be able to go on because every time I’d visit the park the wait was three hours. I’m a huge Harry Potter fan, it’s basically why I have an annual pass.

What’s a virtual line, you ask? Sort of like a FastPass at Disney in the sense that you reserve a window of time to show up at an attraction later in the day. But at Universal you can only reserve spots once you’re in the park.

Universal has expanded the number of attractions that offer virtual lines. But before you could still wait in those rides’ physical lines without a reservation. In most cases now, if you can’t get a spot in the virtual line you can’t ride at all.

So you can imagine my disappointment when I opened the app and saw that all of the major Harry Potter attractions were booked for the day. The parks were more crowded than I expected.

I would have regretted my decision to drive an hour from Tampa a lot more if I wasn’t well-versed in the Disney FastPass game. Even spots on the most popular rides can become available as guests’ plans change and they give up their reservations. But you’ve got to be constantly checking the app so you’re ready to jump on a reservation at a moment’s notice.

Some rides had regular queues, like the rollercoaster Hollywood Rip Ride Rockit, the first ride I checked out. As with all attractions, staff carefully controlled how many people were allowed in the locker area and how many people could advance in the line. Blue tape placed every six feet marked where parties could stand as they moved through the line.

Blue tape marked where each party should stand while waiting in line for rides.
CREDIT STEPHANIE COLOMBINI / WUSF PUBLIC MEDIA

I was impressed with how well people stuck to these markers. I’m used to seeing people ignore them in grocery stores but on this day at Universal, there seemed to be a collective respect for all things safety.

As I approached the ride vehicle, a staff member squirted some hand sanitizer in my hand. I was pleased to see that happen on every attraction.

Normally single riders would be assigned to a seat next to someone else alone in a row, but now Universal is spacing parties out so that no one rides with strangers.

My first couple rides went smoothly, but things got a little chaotic when I went to Revenge of the Mummy.

Families were grouped together in black squares while waiting for the Despicable Me ride.
CREDIT STEPHANIE COLOMBINI / WUSF PUBLIC MEDIA

The line for returning virtual line guests wrapped around the outside and across the street, so there was a lot of confusion as guests approached the ride building.

Staff used masking tape to set up “X’s” every six feet along the outside line. I was happy to see them take initiative to maintain safety, but wonder if they can keep that up that kind of diligence as crowds grow when it actually reopens.

Oh, and it was raining, which I was actually grateful for because it made walking around in the mask more bearable.

While I waited, I checked the virtual line options again on my app. Every single ride that had a virtual line was booked for the day. And there weren’t too many rides with regular lines that I actually wanted to go on except for the Hulk coaster, which had a 75-minute wait most of the day.

I checked the time: I had only been at the park for two hours, was my day already almost done?

As soon as I got off the ride, however, my mood changed dramatically. I saw spots open up for two Harry Potter attractions: the Gringotts ride in Diagon Alley and the Hagrid ride. I may or may not have squealed a little bit when the latter reservation was secured.

Diagon Alley, which is located within Universal Studios, was relatively quiet. Staff stood outside the shops controlling how many people went inside. The biggest crowd was around Gringotts Bank, the main landmark of the area.

It might have been the rain, or limited capacity, but the usually-packed Diagon Alley was relatively quiet.
CREDIT STEPHANIE COLOMBINI / WUSF PUBLIC MEDIA

After the Gringotts ride I bought an ice cream cone. I removed my mask to eat it, as everyone else did when they ate or drank. Fortunately people were good about keeping their masks on otherwise. I did not encounter any blatant violators. But again, this was not the typical high-90’s summer day Florida is used to, so that may have helped.

I rode the Hogwarts Express over to the Wizarding World of Harry Potter Hogsmeade in Islands of Adventure. This was the most crowded I had seen the park all day.

If you’ve ever been to Hogsmeade on a normal day you’ll know that it is almost always mobbed with people, and its narrow streets can make it impossible to move comfortably in some areas. Even on this day with limited capacity, the six-foot rule seemed to go out the window in many cases.

People in lines for the restaurant, lockers and rides all seemed to be very close to one another despite staff members’ best efforts to regulate. Surprisingly, I never waited in line for a bathroom once, and those were all very clean with plenty of soap and hand sanitizer.

I had some time to kill before my window started for Hagrid so I took some obligatory pictures of Hogwarts Castle and walked past a musical performance.

Although the parade and nighttime fireworks were cancelled to avoid crowds, smaller shows that happen throughout the day, such as the Frog Choir and Blues Brothers concerts, still went on. Blue circles on the ground marked areas where people could dance along without getting too close to one another.

Finally it was time for the main event. The Hagrid ride lived up to the hype, and getting to experience it with almost no wait made my trip to the parks on Wednesday worth it.

At that point the park was still going to be open for another couple hours but the virtual lines were still booked on some of my other favorite attractions, such as the ride inside Hogwarts Castle and Skull Island: Reign of Kong. And I was starting to get very uncomfortable from wearing the mask in the heat. I decided to leave on a high note after Hagrid and make my way home.

I ended up having a great day and commend Universal for how it handled the safety restrictions. But I also have an annual pass that I already used enough times to get my money’s worth. This was almost like a bonus trip.

As I mentioned up top, I wouldn’t recommend buying a ticket to visit right now unless you’re comfortable splurging.

Single-day admission for one park starts at $119 and if you want to see all of the Wizarding World of Harry Potter, you need a two-park ticket, which starts at $174.

Those are steep prices as it is, and right now you’d be paying that price but not get to experience the parks in their entirety, and not with same comfort and convenience you normally would.

Just some things to think about it.