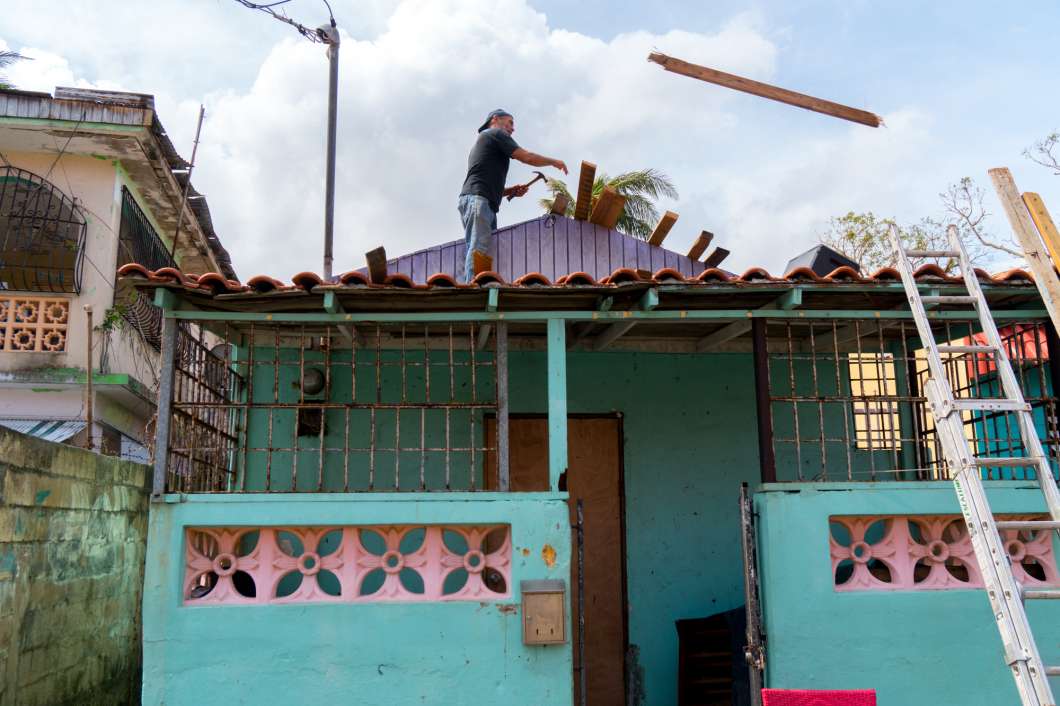 A man's works on his house, which was severely damaged by Hurricane Maria, in San Juan's Playita neighborhood in Puerto Rico. Infrastructure problems that predated the hurricane dramatically worsened the situation in Playita.

Over a San Juan freeway overpass, near the low-income Playita community, there’s a sign that reads, “SOS Playita Needs Water and Food.”

It was a cry for help put up by residents who say they waited more than a week after the storm without receiving any outside aid.

There was a feeling, says 21-year-old Edison Rodriguez, that his community was “running out of time. That you can only have so much water, so much food [between] each other. That’s why they put out those signs outside.”

Now, like many other parts of the country ravaged by Hurricane Maria, there are small signs that the situation here is improving — but for the residents living through it, the progress is painfully slow.

Just five percent of the island has working electricity from the hurricane-devastated grid, and cellular service is slowly getting better but is still at about a third of capacity, according to Puerto Rico’s governor, Ricardo Rosselló Nevares.

Infrastructure problems that predated the hurricane dramatically worsened the situation in Playita. There’s a small lake right behind the neighborhood, where pumps usually prevent the water level from reaching flood levels.

But the area’s leader, Cecilia Collazo Rivera, says that two of the seven pumps were broken when the storm hit, causing floodwaters to surge over a cement-block wall that residents built.

Marks on the homes, some of them multiple feet high, show where the water hit. There are a handful of homes still flooded with inches of sewage-tainted water.

Slowly, though, the water has receded; a truck helps suck up remaining water from the drenched ground. One resident sips juice from a coconut and cheerily pounds nails into a damaged roof.

“There’s a big sense of relief that it’s drying out,” Edison Rodriguez says. But there are major shortages of clean water, a problem across Puerto Rico.

Most people in the community get their water through cisterns that rely on electric pumps to operate. Without electricity, the water is just trickling out of pipes.

Throughout most of the island, the only power supply comes through generators; the few people that have generators in Playita share access by throwing extension cords to their neighbors.

And powering those generators involves standing in long line for gas. Lines are a major fixture of life right now — many grocery stores and pharmacies allow people to enter only in small groups to control the number of people inside.

Rodriguez, who has an 8-month-old baby, is a coordinator at a doctor’s office — but, at the moment, problems with the communications grid have prevented him from working. And he doesn’t know when he’ll be able to return to work.

His wife is able to return to her job this week. Is he relieved? “Yes and no,” Rodriquez says. “Yes because we need a way to generate, but no, because in the current situation, because while I’m out getting stuff, searching, hunting, you could say, she’s home with the baby.”

Concern is growing about how long it will take businesses to open their doors again. People here don’t necessarily have a lot of savings, and even if they do withdrawing funds is no easy task. Long lines form at ATMs, and because of the electricity situation, most places are only taking cash.

Many in Playita are also concerned about how the conditions will impact their elderly family members and neighbors. Maria Reyes spends most of her time these days caring for her 82-year-old mother. Her bright-green-walled home is missing almost half its roof, razed by Maria. Puddles of water from the storm still cover the floor.

Her mother Rafaela Pizarro Parrilla, who suffers from diabetes, was admitted to the hospital after the storm for low blood sugar. Now, facing the prospect of months without electricity, Reyes says she’s seriously considering the possibility of moving her mother to the mainland U.S.