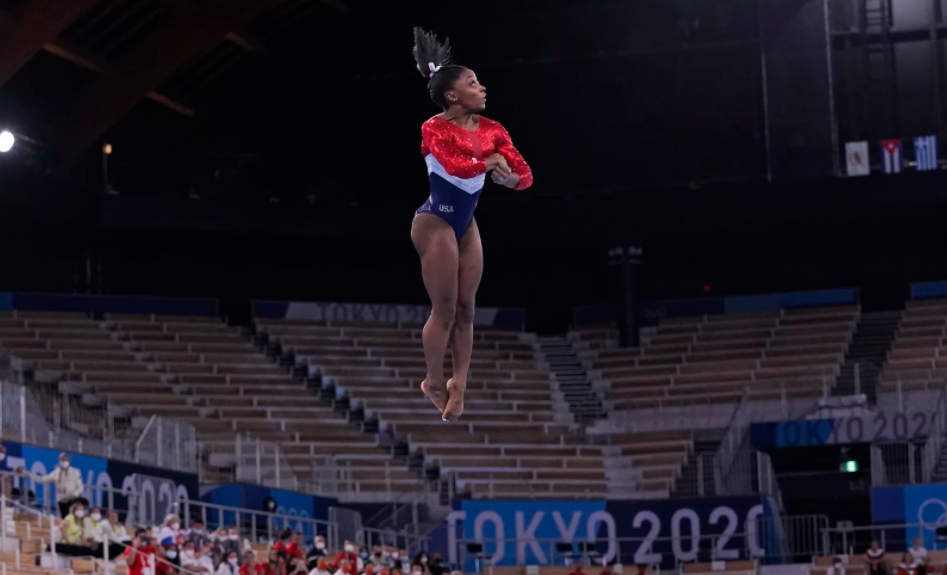 Simone Biles from the U.S. performs on the vault during the gymnastics women's team final at the Summer Olympics on Tuesday in Tokyo. Gregory Bull/AP

Simone Biles from the U.S. performs on the vault during the gymnastics women's team final at the Summer Olympics on Tuesday in Tokyo.
Image credit: Gregory Bull

U.S. star Simone Biles, the greatest gymnast of all time, suddenly pulled out of competition after the first rotation of the four-event team final at the Tokyo Olympics.

“Simone has withdrawn from the team final competition due to a medical issue,” USA Gymnastics said in a statement to NPR. “She will be assessed daily to determine medical clearance for future competitions.”

It’s a devastating blow for her three teammates, who are all first-time Olympians. Biles was expected to compete on all four apparatuses.

Three rotations through the final, the team from Russia is just 0.8 points ahead of the U.S.

After pulling out, Biles remained in the arena wearing white warm-up gear, rather than the team leotard, and hugged her teammates. She could be seen jumping to celebrate their strong performances and was not limping when she walked between apparatuses.

She had a rocky start on the vault, scoring 13.766 and taking a large step on the dismount. In Rio, she scored 15.933 on the same apparatus.

Team USA scrambled to replace her in the three other events she was expected to compete in, with Jordan Chiles stepping in on the uneven bars and balance beam.

On the uneven bars, Chiles managed to pull out a strong performance, sticking the landing and scoring 14.166. Her teammate Sunisa Lee, a specialist on the uneven bars, secured an exceptional score — 15.400 — providing the team with much-needed good news.

In the third rotation, on the balance beam, Chiles also put a strong score on the board when she stepped in for Biles again. Solid scores from Grace McCallum and Lee helped to narrow Russia’s lead.

It’s also not clear whether Biles will compete later on in the competition in the individual events or the all-around individual final, which she won at the Olympics four years ago.

Biles qualified for all five individual finals. The women’s all-around competition is slated for Thursday, and the vault and uneven bars kick off the individual competitions on Sunday.

Biles was facing huge expectations for her performance in Tokyo. “I know I brush it off and make it seem like pressure doesn’t affect me but damn sometimes it’s hard hahaha! The olympics is no joke!” she said on Instagram ahead of the team final.