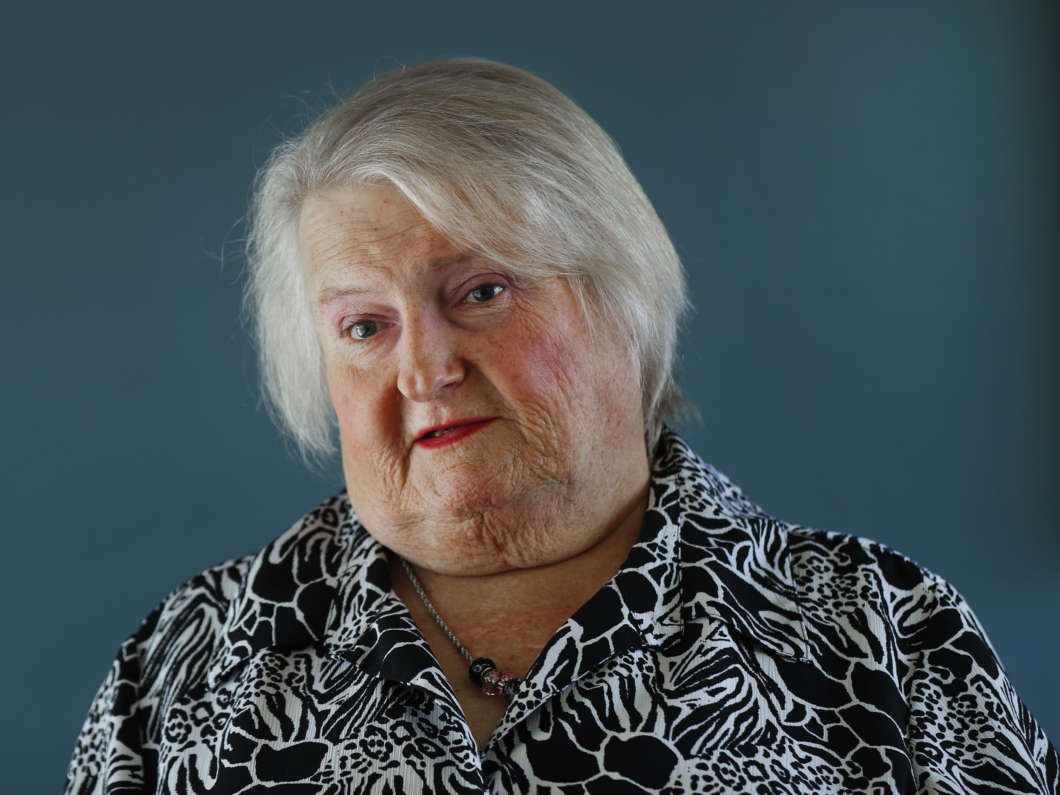 Aimee Stephens is at the center of the debate over whether employers can fire workers for being LGBTQ. The Supreme Court will hear her case Tuesday.
Image credit: Paul Sancya

At the U.S. Supreme Court, the long-awaited showdown over the rights of LGBTQ employees is center stage. On Tuesday, the justices hear a set of cases testing whether the federal law that bars sex discrimination in employment applies to LGBTQ employees.

Specifically, the question is whether employers are free to fire employees because they are gay or transgender. Front and center in these cases is Gerald Bostock who, for 10 years, was the child-welfare coordinator for Clayton County, Ga. His primary responsibility was a program that provides advocates in court for abused and neglected children.

“It was the job I loved, and my employer loved me doing the job,” says Bostock, noting that under his leadership the child advocates program “reached the benchmark of serving 100% of the children in foster care,” an “unheard of milestone” for any such program in the greater metro Atlanta region.

“I was fired for being gay”

But in 2013, Bostock joined a gay recreational softball league. And “from that point on, my life changed, ” he says. “Within months, I was fired for being gay. I lost my livelihood. I lost my medical insurance, and at the time I was fighting prostate cancer. It was devastating.”

Also front and center on Tuesday will be Aimee Stephens. She worked for the Harris Funeral Home in Livonia, Mich., as a funeral director for six years, presenting as a man. But by 2012, at age 51, she was in despair over her gender identity, and contemplating suicide.

“I stood in the backyard for an hour with a gun to my chest, but I couldn’t do it,” she says.

Stephens decided she would come out at work as a transgender woman. For eight months, she worked on a letter to her boss and co-workers telling them of her gender identity.

“In truth … even I do not fully understand it myself”

“I have realized that some of you may have trouble understanding this,” she wrote, adding, “In truth, I have had to live with it every day of my life, and even I do not fully understand it myself.”

Two weeks after giving the letter to her boss, Stephens was fired.

Stephens and Bostock both took their former employers to court, charging that their dismissals were based on sex and thus violated Title VII of the 1964 Civil Rights Act, which bars discrimination “because of sex,” or “on the basis of sex.”

The owner of Harris Funeral Homes, Tom Rost, explained in a videotaped interview with his lawyers why he fired Stephens, saying that he was concerned about how the families of the deceased would react to Stephens who was, in Rost’s words, “the face of the Harris Funeral Home.”

Neither Clayton County officials nor their lawyers would comment about Bostock’s firing.

But in their briefs the lawyers in both cases argue that Title VII of the 1964 Civil Rights Act does not apply to sexual orientation or gender status at all. “Everyone understood in 1964 [when the Civil Rights Act passed] that sex meant biological sex,” says John Bursch who is arguing on behalf of Harris Funeral Homes in the Supreme Court. That means that neither women nor men can be treated unequally in the work place, he says, but that “just does not translate into other categories” such as sexual orientation or gender identity.

Supporting that argument are 15 states, including Texas, and its solicitor general, Kyle Hawkins. The “common sense” argument, he asserts, is that “sex is not the same as sexual orientation and not the same as gender identity.”

But lawyers representing the fired workers counter that the Supreme Court over the last half century has interpreted the law far more broadly than that. They note that the justices have applied the anti-discrimination statute to a variety of situations that Congress wasn’t thinking about in 1964.

Where and how to draw the line

Indeed, more than two decades ago, the Supreme Court ruled that even same-sex sexual harassment was illegal under the statute. Writing for a unanimous court, conservative Justice Antonin Scalia, said that while same-sex sexual harassment was “not the principal evil Congress was concerned with” in 1964, “statutory provisions often go beyond the principal evil to cover reasonably comparable evils.” And, he said, “it is ultimately the provisions of our laws, rather than the principal concerns of our legislators by which we are governed.”

Stanford’s Karlan, who is arguing for the gay employees on Tuesday, will remind the justices of the court’s very first sex discrimination case after enactment of the 1964 law: Phillips v. Martin Marietta Corporation. At issue was an employer’s policy barring the hiring of women with young children.

The court ruled unanimously that the policy was illegal sex discrimination. Karlan argues that just as women with children are a subset of women covered by the anti-discrimination law, so too are gay, lesbian and bisexual employees.

The argument for transgender employees may be more politically difficult to sell. But it is arguably more stark. It goes like this: If an employer hires a man and later fires the employee when the employee shows up as a woman, how is that not discrimination based on sex?

Lawyer Bursch will tell the justices that sexual orientation and gender status simply do not fit under the 1964 anti-discrimination formula. He warns that if the court were to rule against the employers in these cases, it would have ramifications beyond employment.

“If we redefine the meaning of sex in federal law,” he predicts, it would allow “biological men to identify as women and take women’s places on sports teams.” Bursch argues that has already happened in some places, with cisgender women losing out in medals to transgender women.

Federal law does indeed bar sex discrimination in sports programs at schools that get federal money. And the NCAA has developed regulations for when trans student athletes may or may not participate. But as Stanford’s Karlan observes, Title IX, known best for its impact in advancing women’s sports, “is a different statute.” And the regulations for education funding under Title IX “are different than the rules in the workplace” under Title VII.

Lawyers for the employers respond that Congress in 1964 simply did not anticipate the questions raised in these cases about the scope of Title VII and that Congress, not the courts, should be addressing these issues.

The case has drawn even more attention than anticipated, with dozens of friend-of-the-court briefs on each side. Siding with the employers are business groups that, for the most part, have some religious affiliation. But weighing in on the other side, in favor of protection for gay and trans employees, are 206 major corporations who employ over 7 million workers.