Should You Be Worried About Pesticide Naled? 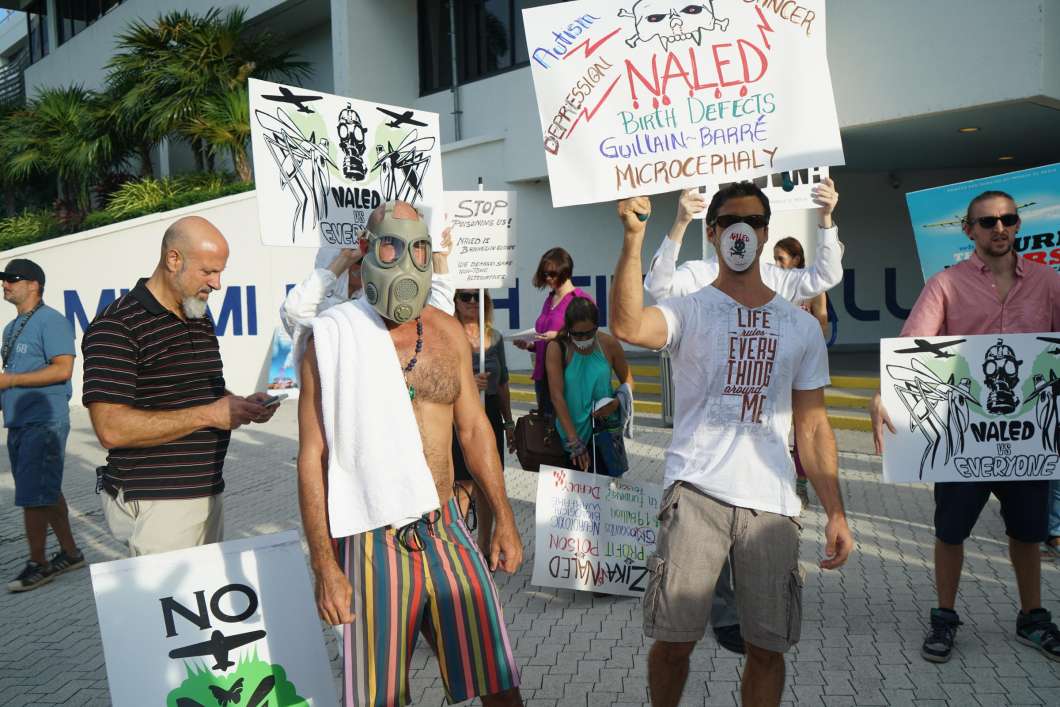 The aerial spraying of pesticide naled has sparked protests in Miami. Should residents be worried? (Kyle Holsten, WLRN)

Miami Beach’s efforts to control Zika-carrying mosquitoes have been challenged over the past two weeks by residents worried about possible adverse health effects of the pesticide naled.

In high concentrations, naled is a neurotoxin that can cause vomiting, tremors and seizures – and that’s concerning to Miami Beach residents who say they want more of a say in the decision to proceed with spraying.

“I don’t want anything toxic inside of me or near me or in the air I breathe or in the flora and fauna that surrounds me,” said Miami Beach resident Maria de los Angeles.

Experts say that although naled is toxic, the doses used in spraying are so small that they will not impact human health.

“Of course, if you drank a lot of the stuff, it might actually kill you in the end,” said Dr. Keith Solomon, a pesticide toxicologist emeritus from the University of Guelph in Ontario. But, he said, in a study where scientists fed rats “worst-case scenario” concentrations of naled every day for two years, “it caused absolutely no adverse effects.”

Solomon added people in Miami Beach probably won’t be exposed to harmful amounts even if they run around stark naked while the aerial spraying plane flies overhead. Miami-Dade County officials say the planes release about half an ounce to an ounce of pesticide per each acre of spraying – in keeping with U.S. Environmental Protection Agency regulations.

Since the spraying started on Friday, Sept. 8, some Miami Beach residents have been posting online about rashes, nausea, headaches and dizziness. They attribute these symptoms to naled spraying and explain how they’re keeping their children out of school, wearing masks, turning off their air conditioning and taking other measures to minimize exposure.

Dr. Richard Fenske, a pesticide expert from the Pacific Northwest Agricultural Safety and Health Center at the University of Washington, says that as a father of two who buys a fair amount of organic produce, he understands Miami Beach residents’ concerns.

“Being concerned is important and very reasonable, and there are situations where your children could be at risk,” he said. “I don’t think this is one of those situations.”

Fenske says parents don’t need to worry about taking their kids to the pool, the park or the beach because the already very tiny concentrations of naled that come from spraying degrade fast in water and sunlight. He says the people most at risk for harm from naled are the technicians who mix the pesticide and the pilots who fly the planes.

A representative from the pesticide awareness group Beyond Pesticides agreed, telling WLRN the European Union banned naled in 2012 because of concern for those workers.

Both Fenske and Solomon, the pesticide researchers, say there’s no need for alarm over dichlorvos, the breakdown product of naled. Like naled, dichlorvos is toxic in high doses. But, the researchers say, the concentrations of dichlorvos released after aerial spraying are minuscule and dissipate into the atmosphere rapidly.

“If I were with my family in that county and there was spraying of this kind, I would probably bring my children indoors during the spraying, but otherwise, I wouldn’t really be worried about it,” Fenske said.