Shootings In Chattanooga: What We Know About The Alleged Gunman 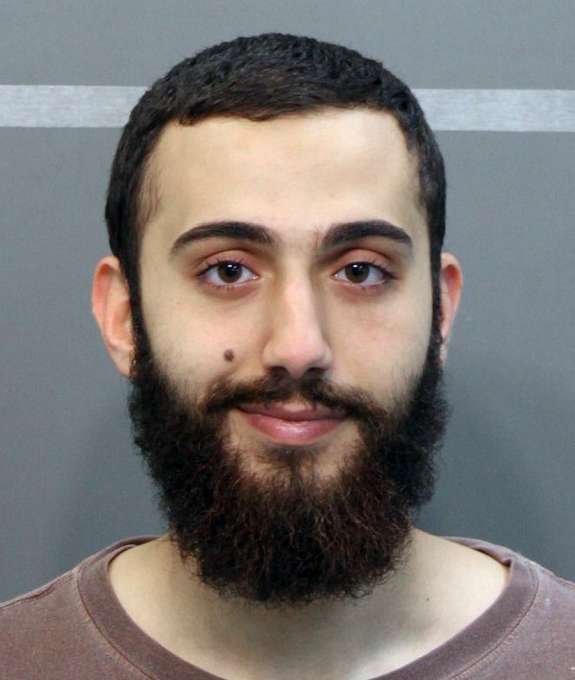 This booking photo taken in April and released by the Hamilton County, Tenn., sheriff's office shows a man identified as Mohammod Youssuf Adbulazeez after being detained on suspicion of a driving offense.

A day after a gunman opened fire at two military centers in Chattanooga, Tenn., and killed four Marines, authorities are trying to answer the big question: Why?

At a late-night press conference, authorities said they had yet to pin down a motive. But earlier, officials identified the shooter as 24-year-old Mohammod Youssuf Abdulazeez, who died during the course of the attack.

— NPR’s Dina Temple-Raston reports that Adbulazeez was a naturalized U.S. citizen who was born in Kuwait. His parents are Jordanian.

— FBI Special Agent in Charge Ed Reinhold said there is nothing that “directly ties [the gunman] to an international terrorist organization.”

— Law enforcement sources tell Dina that Abdulazeez’s father was investigated for ties to terrorism a couple of years ago. The Washington Post reports he was added and later removed from a terrorism watch list.

— People who knew Adbulazeez told news media that they were surprised that he would do a thing like this.

“No one seems to have seen it coming. FBI officials said they had no warning of a pending attack. And his family and friends are baffled.

” ‘They’re nice people, you know?’ said Elijah Wilkerson, a neighbor whose wife went on walks with Abdulazeez. ‘He must have just snapped.’

” ‘I never thought in a million years that it would be this guy,’ said Kagan Wagner, one of his high school classmates. ‘He was friendly, funny, kind.’ “

— CNN reports that Abdulazeez was a wrestler and also a devout Muslim:

“He at times interrupted training sessions with fighting coach [Scott] Schraeder to pray.

” ‘I wouldn’t call it overly religious,’ Schraeder said. ‘He followed his religion; he would pray at six o’clock. He’d go into our office and pray.’ But he would skip prayers at times, he said.

“Schraeder does not believe he was an extremist.

” ‘His favorite training partner to grapple with — not striking, but actually submission grapple with, when you’re actually on the ground in close proximity contact with — was a Russian Jew, hardly what you would see as someone who would be a radical Islamist,’ Schraeder said.”

— The Washington Post reports that after graduating from high school, Abdulazeez earned an engineering degree from the University of Tennessee at Chattanooga in 2012.

“His family was rooted in the community of Hixson, a Chattanooga suburb,” the paper reports. “His father, Youssef, was employed by Chattanooga’s Public Works Department.”

— The Times Free Press reports that Abdulazeez had one previous run-in with police: He was arrested in April for driving under the influence.

“The arresting officer noted the smell of alcohol and marijuana, and said Abdulazeez had a white powdery substance around his nose, according to the arrest report.

“Abdulazeez told police he had been around friends that night who’d been drinking and smoking. But he failed a sobriety test, was arrested and released on a $2,000 bond.”

— The New York Times relays much the same account about Abdulazeez: a young man who was living a fairly ordinary suburban life in the United States.

But recently, the paper reports, Abdulazeez may have been changing.

The Times points to a blog that the SITE Intelligence Group, an organization that tracks international terrorist groups, says was kept by Abdulazeez.

“A July 13 post stated that ‘life is short and bitter’ and that Muslims should not let ‘the opportunity to submit to Allah … pass you by.’

“In the last two or three months, Mr. Abdulazeez had begun showing up rather regularly at Friday Prayer at the Islamic Society of Greater Chattanooga, a large mosque and cultural center, said Dr. Azhar S. Sheikh, a founding member of the center’s board.

“Dr. Sheikh said that he showed no signs of extremism. He said the family regularly worshiped at the mosque. He thought the young man had stopped attending services because he had moved away, and he assumed that Mr. Abdulazeez was attending again because he was back in town and staying with his parents.”

Note that we are spelling Abdulazeez’s name differently from other news outlets. We have adopted the spelling used by FBI officials.