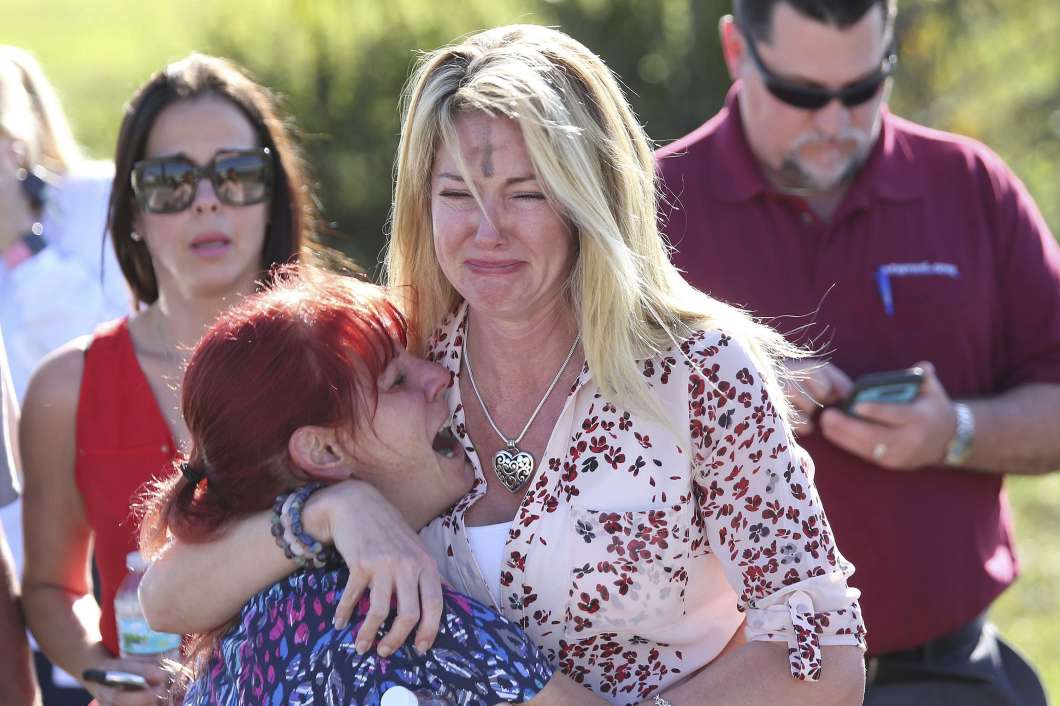 Parents wait for news after a shooting at Marjory Stoneman Douglas High School in Parkland, Fla., on Wednesday. Officials say that there are "multiple" people dead and that a suspect is in custody.
Image credit: Joel Auerbach

The Broward County, Fla., sheriff said 17 people are dead in the Wednesday shooting at Marjory Stoneman Douglas High School in the city of Parkland, northwest of Fort Lauderdale. He said a suspect is in custody.

In a news conference, Sheriff Scott Israel said 12 of the victims were found inside the school building and two were found outside. Another victim was found on the street, and two people died at the hospital.

Israel identified the suspect as 19-year-old Nikolas Cruz, a former student who had been expelled for disciplinary reasons. The sheriff said the shooter used an AR-15 rifle and had “multiple magazines.”

Israel said that his triplets had graduated from the same school. “It’s a horrific, horrific day,” he said.

Earlier, county school Superintendent Robert Runcie told reporters that he had just given a teacher-of-the-year-award winner a new car and was leaving the event when he heard about the shootings.

The suspect was found off campus and was taken into custody without incident.

“We are pretty sure the suspect pulled the fire alarm to get the kids out into the hallways,” Alison Carew, the mother of 15-year-old freshman twins, told All Things Considered. “And they heard noises and then the teacher shuttled them into safe places.”

The school was locked down as some students were escorted outside, while others were advised to remain barricaded inside. Carew said her children believe the shots were fired in the freshman building, “a three-story building separate from every other building at the school.”

“They had to put their backpacks in the middle of the street and [continue] with their hands up,” Carew added, speaking of her kids. “Their backpacks were searched, and they were subsequently escorted off the campus.”

Authorities have not determined a motive for the shooting.

Florida Gov. Rick Scott and President Trump have been told about the shooting.